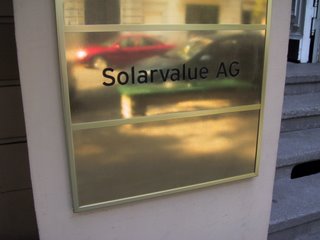 Solarvalue AG (http://www.solarvalue.com) shares (XETRA:SV7) were listed last week on the Open Market at the Frankfurt Stock Exchange and began trading on September 19, 2006. The Open Market is a rough equivalent to Over-the-counter (OTC) equity markets in the United States, also known as the “Pink Sheets”.

Per a press release dated the same day, Solarvalue reported the supervisory board of Holding Slovenske elektrarne (HSE) has approved the sale of their controlling 90.78% stake in TDR – Metalurgija, Ruše, Slovenia, to a joint venture between Solarvalue Productions d.d., a wholly owned Slovenian subsidiary of Solarvalue, and a Slovenian partner, presumably W&P Profil Maribor.

“Subject to ministerial approval, and finalisation of contracts, we could begin in November with refurbishment for the production of solar silicon,” said Chief Executive Officer Claudia Boehringer.

While the transaction amount remains undisclosed, Solarvalue has tipped aggressive plans to upgrade the facility and produce up to 2,000 metric tons of solar grade silicon from metallurgical grade silicon in 2007.

An undisclosed European photovoltaic group has signed a letter of intent to acquire a stake in Solarvalue Productions d.d. to secure additional supplies of solar grade silicon for their production.

I admit to being surprised by Solarvalue’s quick listing on the Open Market, but I am not an expert on German financial markets and I assume this will help them to line up additional capital and investors. Solarvalue still plans a traditional IPO on a major stock exchange when they achieve their solar grade silicon production targets.

Solarvalue has made progress on the acquisition of TDR – Metalurgija, but they still need regulatory approval and to finalize the contract. I trust Solarvalue will negotiate a competitive, long term electricity contract with HSE, Slovenia’s largest electric power provider; silicon production is an energy intensive process.

Of course, I am very curious to learn the identity of the mysterious European photovoltaic group.