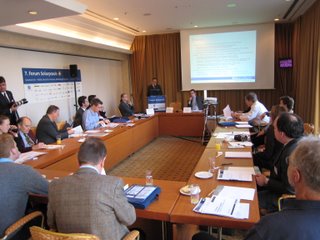 At the Forum press conference, Solarpraxis CEO Karl-Heinz Remmers, aka “Dr. Sonne” (The Sun Doctor), discussed Solar Forum improvements for 2006 such as Analyst Conferences for nine significant German solar companies and real time English translation. The official language of the Forum Solarpraxis is German, but the real time translation service was robust, and questions could also be asked in English. Mr. Remmers has ambitions to create the largest Analyst Conference dedicated to Renewable Energy complementing the Forum Solarpraxis agenda. In addition, Mr. Remmers discussed near term plans to extend the Solarpraxis platform to Spain with United States expansion also possible.

Carsten Körnig, Managing Director, with the German Solar Industry Association (Bundesverband Solarwirtschaft, BSW), expected the German market to grow by about 10% from 600 MWp to 660 MWp in 2006. I asked Mr. Körnig about international market growth, and he said he wasn’t sure but thought it was double digit anywhere between 10-15% and 30+%.

Outside the forum, it wasn’t difficult to engage new business acquaintances on the status of the German solar market. At dinner, I spoke with a module manufacturer and an entrepreneur. The module manufacturer expected a price correction of 10-15% by the first quarter of 2007. However, the entrepreneur believed there might be as much as 400 MWp (perhaps the October 2006 PHOTON International editorial by Michael Schmela was his source?) of solar photovoltaic modules in inventory and predicted a drastic correction across the value chain by March 2007 impacting wafer and cell manufacturers as well.

In the Analyst conferences, Sunways AG (FRA:SWW), a vertically integrated manufacturer from cell and modules to inverters and systems, provided insights into the tribulations facing a medium sized, forward integrated system solution company during the German market slowdown. Solar cell material costs have surged from 65% to 87% driven by higher wafer and polysilicon prices reducing solar module margins. Higher module prices have contributed to solar module inventory build in Sunways’ warehouses, but Sunways CEO Roland Burkhardt predicted module inventories would be reduced in the fourth quarter 2006 as the solar market transitioned from a seller’s market to a buyer’s market.

Since German market growth has slowed and growth markets in Spain, Italy, California, and Asia have not compensated, the solar module inventory build must impact solar wafer and cell manufacturers at some point. Right now, solar module manufacturers, distributors, and system integrators are left holding the inventory. Is this the result of take or pay contracts propagating from silicon suppliers through to the solar module channel?

One thing I didn’t expect from the 7. Forum Solarpraxis was to eat so well. Besides a continental breakfast, coffee breaks, and lunch, there was also a dinner the first evening. My top suggestion to the Solarpraxis team is to make the event a no smoking affair; this will help prevent annoying carcinogenic greenhouse gas emissions and promote healthy lungs!