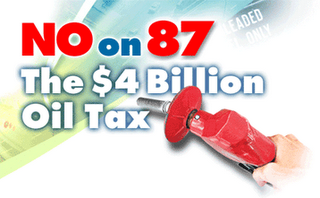 I agree with the intent but not the implementation.

I promised to take a look at Proposition 87 (Prop 87) after seeing the end of Mr. Khosla’s keynote presentation at Solar Power 2006. California’s General Election is on Tuesday, November 7, 2006.

Prop 87 requires California oil producers to pay an extraction fee known as a severance tax on each barrel of oil pumped from the ground. The $4 Billion generated from the severance tax would finance a program to reduce petroleum consumption in California by 25 percent within ten years through incentives for alternative energy, education, and training and be governed by a new California Energy Alternatives Program Authority. Prop 87 spells out how the funds are allocated.

Impartial nonpartisan analysis of Prop 87 is available from the Legislative Analyst’s Office and the League of Women Voters of California Education Fund or read the text of the proposed law. Biased viewpoints can be found at YES on 87 and NO on 87.

In my opinion, Prop 87 will result in higher gas prices for Californians in the near term because the severance tax will be passed along to consumers despite sections in the proposition disallowing this practice. The progressive nature of the Prop 87 severance tax would create even higher gas prices when oil is over $60 per barrel. Also, Prop 87 will discourage domestic California oil production and encourage oil imports from the Middle East and Alaska. More imported oil from the Middle East will increase dependence on foreign oil, =not decrease it=. Prop 87 is slanted towards the development of “clean” alternative fuels and vehicles though it gives lip service to renewable energy and energy efficiency. The California Energy Alternatives Program Authority would create a new bureaucracy rife with conflicts of interest, exemption from government checks and balances, lacking accountability, and consisting of an eclectic board from government and business.

Editorials from the Mercury News, the San Francisco Chronicle, and the San Diego UNION-TRIBUNE have advised California voters to reject Proposition 87. And see the NO on 87 site here for a complete editorial roundup from almost every major newspaper in California lining up against Prop 87.

Besides siding with the NO on 87 side of this proposition, I have a better proposal to achieve the aims based on sound economics. I would impose a hefty $1.00 per gallon gas (diesel or fuel) tax. Since California uses about 16 billion gallons of gasoline per year, this would generate $16 Billion in revenue while discouraging gas consumption and flattening demand growth for oil. As a regressive tax, the $1.00 gas tax should be ramped by 25 cents per year over four (4) years to mitigate the shock to consumers. Furthermore, my gas consumption tax would be structured to encourage the use of alternative fuels as follows:

While revenues from the tax could be invested in research, development, and plant construction for alternative fuels and renewable energy technologies, the revenues could also fund deficit reduction, education, or reduce other taxes in California. This simple structure would bring powerful economic forces into play by creating and encouraging alternatives to oil and establishing a model for the rest of the country to follow.

GP Note: I am not a California resident, so I won’t be voting on Prop 87. But I have lived and voted there…