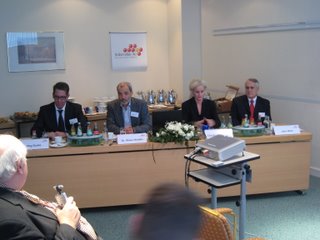 The Next Steps – Press Conference

Of the three open areas I wanted to learn more about (see previous post), Solarvalue addressed one in detail disclosing their near term plans, solar grade silicon production process, and strategy.

Solarvalue CEO Claudia Boehringer said, “We are expecting the authorities to approve our purchase of the TDR plant before the end of November. As soon as we have that approval, we will immediately begin converting the existing metallurgical factory to produce silicon. Keeping the current, experienced staff and management will enable us to begin producing solar grade silicon in just six months.” 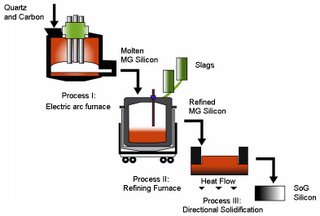 “We will begin by setting up the 12 MW M5 arc furnace for silicon production. At temperatures of 2,200 °C, the furnace is used for the reduction of high-purity quartz with high-purity carbon to produce metallurgical silicon of 99.9+% purity.” said John Mott, Chief Operating Officer of Solarvalue Production d.d. This will be Process I of the enhanced Solarvalue Method. In Process II, several refining steps involve re-melting silicon in induction furnaces, and directional solidification to remove heavy metals and most of the phosphorus. Special slags are added to bind other impurities including boron, carbon, and oxygen. Process III uses a special temperature profile during directional solidification to further reduce the impurity levels of boron and phosphorus to achieve high-quality solar grade silicon.

“In the first six months, strategic investors will provide €20 million for setting up the production of solar grade silicon,” said Strategy Advisor Joerg Duske. One strategic investor from India has a technology expertise focus, while the second strategic investor from Europe is obtaining a stake in the TDR Ruse plant to secure silicon for solar cell production. An additional €10 million investment will be required in 2008 to complete the 4,400 metric ton capacity ramp. Later, Solarvalue may forward integrate ingot and wafer production from solar grade silicon at the TDR facility in Ruse, Slovenia.

You can read the Solarvalue Press Conference release on the DGAP ad hoc service (English, Deutsch).

Although there are other possibilities, could the strategic investor from India be Moser Baer India Limited (BOM:517140)?