A quick glance at the CORE Queue > 10kw indicates a number of backlog applications have been approved using the $48.5 million budget allotment on September 14, 2006. This queue deserves detailed market analysis. 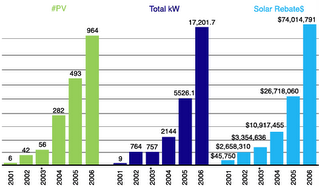 The CORE Activity Update shows cumulative solar installations in New Jersey to date through October 15, 2006. Since the last update through August 23, 2006, there have been 175 new installations for 4669.5 kWp of system capacity and $18,324,417 in solar rebates.