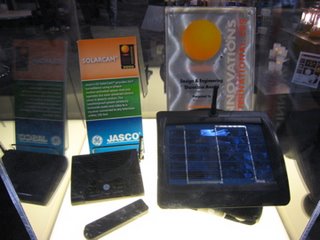 As a 2006 International CES Innovations Honoree, the JASCO GE Wireless SolarCam(TM) was not new, but this weatherproofed wireless surveillance camera charges an internal battery with a small array of multicrystalline solar cells. To conserve power and minimize useless surveillance footage, SolarCam is activated by onboard motion detectors.

The SolarCam has an internal charger circuit and 6V lead acid battery. Expected battery life is about 2 years, and SolarCam needs about 4 to 6 hours of sunlight per day to maintain a full charge.

SolarCam transmits a proprietary 2.4GHz wireless video and audio signal to an indoor receiver with an analog television connection. The receiver can be up to 150 feet (~ 45.7 meters) away and supports four SolarCams. A receiver remote control enables intense surveillance anytime by overriding the motion detectors.

SolarCam has a Manufacturers Suggested Retail Price (MSRP) of $199.99 and can be purchased from JASCO direct by phone (see contact page).

I will cover products on the solar charger and solar panel front in my final CES post, but regular readers can expect a photovoltaic post further up the value chain next.

Special thanks are in order to EPIA, the European Photovoltaic Industry Association, for including four posts from GUNTHER Portfolio in their Solaris Newsletter – January 2007. This is a real honor for the Blog.