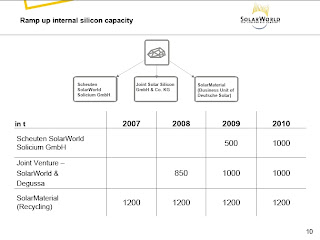 SolarWorld plans for in-house solar grade silicon production are detailed in the above slide titled “Ramp up internal silicon capacity” from the July 2008 Presentation of the Chief Financial Officer. Both the Joint Solar Silicon GmbH & Co. KG and Scheuten SolarWorld Solicium GmbH joint ventures are developed and managed by the Sunicon AG subsidiary. The SolarMaterial subsidiary recycles silicon for SolarWorld.

requires only 10 percent of the energy used by conventional processes and is more cost efficient. The integrated production facility consists of a monosilane production plant operated by Evonik and a second plant in which JSSi uses the chemical to produce solar silicon. The production capacity will initially be 850 metric tons of solar silicon per year.

Three reactors will be used to reach the 850 and later 1000 MT (metric ton) annual silicon production capacity. The total investment by Evonik (51 per cent) and SolarWorld AG (49 per cent) in the JSSI joint venture production facility was said to be in the coy double digit million Euro range (~$10 to $99 million).

“Pyrolysis of SiH4 (monsilane) in tube reactor at 800°C”
Monosilane is decomposed in hydrogen resulting in the chemical vapor deposition of silicon on the tube reactor walls and a silicon powder byproduct. SolarWorld claims the deposition process is protected by four patents exclusive to the JSSI joint venture.

Per the JSSI website, the Evonik (was Degussa AG) and SolarWorld joint venture was formed way back on May 24, 2002. Evonik would supply silane to JSSI while SolarWorld contributed the silane decomposition in tube reactor process technology. Although SolarWorld has a number of patents related to solar grade silicon, monosilane, and trichlorosilane production processes, SolarWorld obtained an exclusive license to the JSSI silicon process technology from GT Equipment Technologies, Inc., now well known as recent IPO GT Solar International, Inc. (NASDAQ:SOLR). Here is the original press release:

and the international patent published by the World Intellectual Property Organization (WIPO):

I have no doubt significant research and development efforts were required by JSSI to commercialize this silicon deposition process over the last six years.

Greentech Media has a good post, Timminco Shares Fall on Production Delay, about their production challenges in the ramp up of solar grade silicon. I have not had a chance yet to listen to the conference call.