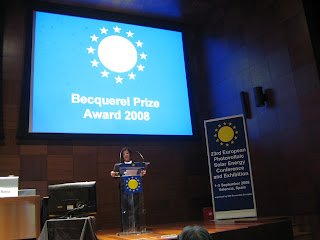 Today, Ms. Rothe is leading the opposition to a “harmonized” European wide green certificate trading system in lieu of and undermining the successful Feed-in Tariff model for fostering and scaling renewable energy technologies to compete with entrenched and subsidized legacy conventional energies such as fossil fuels and nuclear.

In her acceptance speech, Ms. Rothe called for an EU Treaty for Renewable Energy Sources to displace the Euratom Treaty in the 21st century. She also trumpeted the German initiative to create an International Renewable Energy Agency (IRENA):

to provide practical advice and support for industrialized and developing countries seeking to expand their renewable energy sectors, and to work toward improved regulatory frameworks.

Next up from the 23rd EU PVSEC closing session will be the conference technical highlights.