Almost as good as being there?
Some 22,500 attendees thought it was better to go in person.

Official Video Coverage of Keynotes, Plenary Sessions, CEO Panels, and Sponsor/Paid Advertiser Showcases (was I not supposed to say that?) produced by RenewableEnergyWorld.com are available for viewing via the Solar Power International website or on Brightcove.TV. Right click on the links below to open a new tab or window with each video.

Monday, October 13, 2008
Governor Arnold Schwarzenegger Addresses SPI 08
The Governator made a surprise visit and speech before the Opening Reception.

Wednesday, October 15, 2008
CEO Panel – Market Development includes First Solar CEO Mike Ahearn.
CEO Panel – Driving Down Costs
The frank talk of MMA Renewable Ventures CEO Matt Cheney steals the discussion from the ever thoughtful insights of Q-Cells CEO Anton Milner. If you have time for a one video, this is it. I intend to write a post about this CEO Panel.

And Katie Fehrenbacher at Earth2Tech had two photovoltaic scoops this past week: 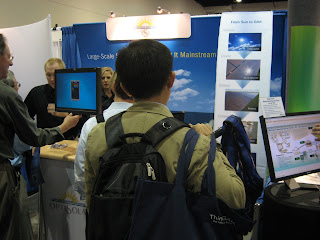 I spoke with the same OptiSolar Vice President, Corporate Communications, Alan Bernheimer, who admitted OptiSolar was at the Expo to “Show the Flag” and had no products to display for the public. I guess Katie asks better questions than I do?

I have a pseudo surprise in the works. I believe some of you have already been visiting the pre-alpha site. The search engines have found it, but Please Stand By.