Be careful what you wish for…
The SEIA (Solar Energy Industries Association) joins the US renewable energy cohort in asking for Investment Tax Credit “adjustments”.

When I read “Investment in Renewables Will Lead to US Economic Recovery, Leaders Say” by Jennifer Runyon at RenewableEnergyWorld.com and checked the press release, “Renewable Energy Industries Ready to Lead U.S. Economic Recovery”, I thought this might not be an SEIA reversal of fortune. I was wrong.

Given the burst of the Housing bubble and subsequent credit crunch, is it any wonder the appetite for creative financing investment tax credits has dried up with financial institutions facing increased regulatory oversight after the unexpected consequences of the Lehman collapse? Traditional American investment banking is dead; long live the bank holding company.

However, the current downturn in the economy has substantially reduced the utility of the tax credits to individuals, businesses, and project developers. So we are asking Congress to make some refinements to the Tax Policy to insure that these credits get fully utilized and continue the growth in all sectors of the renewable energy industry. And specifically, these credits should be improved to be refundable, they should improve transferability, and they should allow Master Limited Partnerships to fully utilize the credits.

So that is priority number one, that is a near term stimulus, that is a change the White House and Congress can make very, very quickly. And we are asking them to do that as soon as possible.

Later in a response to a question from George Lobsenz with The Energy Daily about the ITC refinements, Mr. Resch said:

The investment tax credits, that are available for solar, are a very effective tool when you have a tax credit appetite. When that tax credit appetite starts to decrease, which is what we have seen over literally the last 60 days or so, it becomes less useful. And so the modifications that we are specifically looking for as I mentioned before are:

That PPA model will suffer a downturn if there is no tax credit appetite. 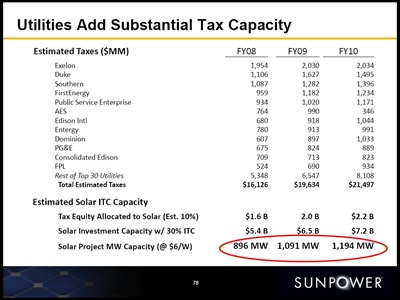 And despite SEPA hailing “the removal of a prohibition that previously prevented electric utilities from taking advantage of the credit” I cited in Solar Investment Tax Credits ride the $700 Billion Bailout Wake, it does not appear utilities are planning major solar investments in 2009.

Near term, and by that I mean the next two years, the utilities may be the only US solar customer with the tax appetite to take advantage of the Solar ITC for large scale projects. SunPower Corporation (NASDAQ:SPWRA) summarizes this conclusion in the slide, “Utilities Add Substantial Tax Capacity” from their recent 2008 Analyst Day Presentation although they also recognize the Utilities have high financing requirements for medium to long term duration credit.