With access to the NanoGram Intellectual Property pool, NanoGram Solar is seeking its first funding round as a standalone company. NanoGram Solar will redeploy technology enabling NanoGram’s 1999 spinoff NeoPhotonics Corporation for planar lightwave circuits to the photovoltaic solar market. NanoGram Solar’s business model is to manufacture and sell solar modules.

Processing the SilFoil into a solar module reduces module assembly costs by another 38% by integrating the cell fabrication and eliminating cell stringing and tabbing.

After the SilFoil processing has been completed, the SilFoil is laminated to glass using an encapsulant like EVA (ethylene vinyl acetate), and the ceramic substrate is released for reuse. The module is ready for back side processing. 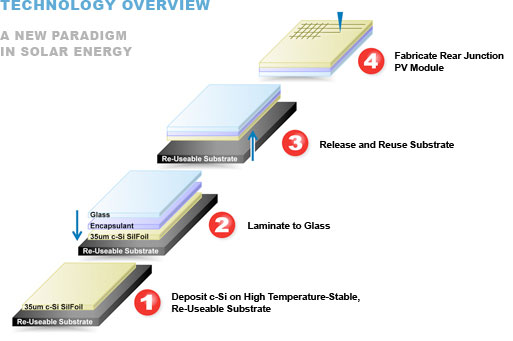 NanoGram’s core laser and nanoparticle ink technologies are combined to drive dopants into the SilFoil module backside to diffuse junctions with laser precision and within the material’s thermal budget. The 150 µm base to emitter pitch resides within typical 1 cm (centimeter) grain boundaries and is another proprietary key to unlocking high performance.

A directly deposited textured capping layer and rear light reflector are processed without etching in the SilFoil to improve light absorption and trapping before deposition of a back-side passivation layer. The fine pitch interconnection combines inkjet printing and laser processing to eliminate screen printing of metal contacts.

Extending their innovations, NanoGram Solar optimizes cell design and layout with Dynamic cell sizing and current matching (DCiM™) to compensate for process nonuniformity. A photoluminescent map of each SilFoil module’s performance is built to drive the x-y laser processing of cells. Cells are matched in current and not physical size improving module efficiency by about 1 to 2%. NanoGram Solar claims the DCiM dynamic module configuration will reduce Balance of Systems (BOS) cost via flexible current voltage configuration and is compatible with micro-inverters.

The main goal of the Specialty plant is move the process into 24 x 7 (round the clock) production and qualify module product for on-grid applications over a 1.5 year ramp period. For the Specialty plant, NanoGram Solar is raising capital mid-2009. Solar has been a separate division at NanoGram for almost the past three (3) years. New funding is being sought from current investors, strategic partners, cleantech, and growth investors.

NanoGram Solar estimates no more than a $75 Million investment will be needed to construct the 50 MW full scale greenfield plant. This equates to $1.5 per Watt of production capacity. NanoGram claims the attractive capital structure for production scaling is the result of a subatmospheric deposition process followed by low cost laser and inkjet printing module processing.

Site evaluation has been completed with four (4) US states and a number of European countries under consideration. The 50 MW plant location and design are at an advanced stage.

GUNTHER Portfolio passed the 1000 subscriber mark for a day last week per FeedBurner. I expect strong original content like this post will keep it above that high subscriber mark. Thanks!