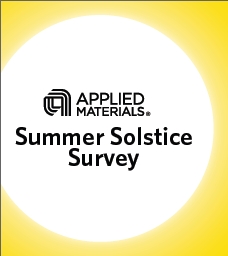 As is often the case, I first saw this Applied Materials, Inc. (NASDAQ:AMAT) press release:

mentioned in the Chip Shots blog by Tom Cheyney at PV-tech.org as “Exuberance and ignorance: Survey finds mixed bag of solar-power knowledge among Americans (revised)”.

Another misconception held by over half of the persons surveyed is that solar panel installations on homes are the most efficient way to harness solar energy. In fact, “solar farms” represent an underutilized source for solar energy. The United States could supply its entire energy needs by covering just 1.6% of its land area with solar cells. In fact, putting solar cells on 1% of the area of global deserts would be sufficient to produce electricity for all the people in the world.

Why are the people wrong about distributed generation?
Generating and using power where it is needed is more energy efficient and perhaps less expensive than extending transmission infrastructure to unpopulated deserts. Power transmission lines introduce losses during electricity delivery. With the health effects of Electric and magnetic fields (EMF) still an open question, who wants a transmission line running through their backyard anyway?

Just last week, “A Whole Lot of Solar Goin’ On in SoCal” by Jennifer Kho at Earth2Tech reports on the California Public Utilities Commission (CPUC) approving a 500 MW (MegaWatt) commercial rooftop solar photovoltaic (PV) program for Southern California Edison. Of course, I do wonder when 1 to 2 MW PV rooftop systems were reclassified as distributed generation?

Million Solar Roofs?
Memories are short, but the California Solar Initiative (CSI) began life as the Million Solar Roofs program. However, solar support policies in California and at the US Federal level, orchestrated by industry associations, regulatory watchdogs, and cost conscious advocacy groups, have aligned to slant support towards large “distributed” (1 to 10 MW) and utility scale PV systems. For example, the Solar Energy Industries Association (SEIA) is now proposing a Clean Energy Bank (or Green Bank) offering 2% interest loans for 20 years in the Waxman-Markley bill, H.R. 2454 American Clean Energy And Security Act of 2009. The loans target commercial systems only of course. Also, the revised California Feed-in Tariff proposal targets projects in the 1.5 MW to 20MW range.

While I realize Applied Materials is interested in selling SunFab production lines cranking out 5.7m2 thin film solar modules for massive, utility scale, ground mounted PV installations, perhaps this is not the photovoltaic vision for the rest of us?

After Intersolar 2006 in Freiburg, Germany, I was travelling on a train from Nürnberg to Regensburg, when I saw a hideous sight. The entire southern side of a hill was covered by solar panels. Although I can’t recall, I don’t believe they were multicrystalline blue. The core issue was a nice green hill encrusted and spoiled by glass. And I find most solar installations and modern wind turbines cool.