A few thousand reference design SolarMagic units shipped in Fiscal 2Q10.
Smart photovoltaic modules with integrated SolarMagic chips to debut in the second half of calendar 2010?

Another power management growth area for us is in renewable energy and in particular in the solar area. We aim to be the power electronics leader in this completely new power efficiency communications and monitoring capability, and we do this by improving the efficiency of solar installations and also electric vehicle batteries.

In the solar area, we continue to make initial shipments of a reference design SolarMagic power optimizer to distributors and large installers in quantities of a few thousand units in the quarter. We continue to get great endorsement for this innovative SolarMagic power management application. Just two weeks ago, we received the renewable energy Electra Award in London.

Our near term objective in this solar area is to work with solar panel manufacturers directly to enable them to introduce more energy efficient or smarter panels with our SolarMagic power management chips integrated into these panels. We are currently expecting the first panel manufacturers to introduce these smart panels in the second half of calendar year 2010.

The use of hardcore semiconductor jargon like reference design by CEO Macleod for shipping SolarMagic Power Optimizers may not bode well for the longevity of National’s solar power electronics system business. In addition, referring to the integration of SolarMagic power management chips into the junction boxes of Smart PV Panels seems to imply National may not be selling a power electronics subsystem to PV module manufacturers.

I interpret a few thousand units to correspond to one (1) to three (3) thousand SolarMagic units shipped in the last quarter and representing somewhere between $199000 and $597000 of revenue for National and their distribution partners assuming a $199 MSRP (Manufacturer Suggested Retail Price) and ignoring the Blocking Diode and channel discounts. 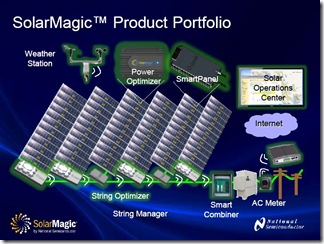 And my impression after the Energy Recommerce, Inc. acquisition for performance monitoring and management solutions by National was that the SolarMagic business was being positioned for a future spinoff.

Solar energy is a particularly attractive opportunity for us. We clearly want to be the power electronics leader in providing more efficiency in this fast-growing solar space.

So is SolarMagic a chip play, a systems and services play, or both for National?

“Microinverters and power optimizers: Power conversion migrates down to the PV panel” by Margery Conner for EDN is a well written technical article that misses a key economic point of comparison between Enphase Energy microinverters and SolarMagic. The article claims Enphase is expensive at about $1 per Watt compared to central inverter solutions but fails to mention the cost of each SolarMagic Power Optimizer is about $1 per Watt in addition to the central inverter!