“Sunnyvale startup Calisolar acquiring Toronto-based 6N Silicon” by Dana Hull for the San Jose Mercury News surprised me Thursday morning. In a stock for stock transaction, Calisolar, Inc. acquired 6N Silicon Inc. for an undisclosed amount and at the same time raised $22.5 million in funding from existing investors in Calisolar and 6N Silicon. Increasing production capacity at the Calisolar Sunnyvale solar cell manufacturing plant (please see “CaliSolar to ramp 50 MW UMG-Si Solar Cell Plant”) and expanding silicon purification at the 6N Silicon facility in Vaughan, Ontario, Canada, will be the primary use for the new funds.

I had a chance to speak with Calisolar Director of Marketing Bret Adams after a long Thursday of interviews beginning with Europe in the early morning Pacific Time.

The Ontario Canada connection
Already with operations in California and Germany, Calisolar will leverage 6N Silicon to participate in the fastest growing photovoltaic (PV) market in North America for the next few years propelled by the Ontario Power Authority Feed-in Tariff program. Calisolar cells made with 6N Silicon will provide cell customers a unique advantage by achieving the first 11% of Ontario’s Domestic Content requirements. Earlier, I thought 6N Silicon might be a good partner for Canadian Solar Inc. (Nasdaq:CSIQ) who instead opted “to Build (a) Solar Panel Manufacturing Facility in Ontario”.

Production status
Calisolar produced the first solar cell from production tools in October 2009 and after optimization commercial shipments began in January 2010. I knew Calisolar was in production by conducting parking lot surveys in the fall and winter after my ramp post. In an ironic twist, retired cars for the Cash for Clunkers program were staged next door at the The Parkinson’s Institute and Clinical Center parking lot during many of my visits. Calisolar has installed a 60 MW line which is expected to be operating at full capacity soon, and they plan to ramp to 200 MW by the end of 2010.

I can’t talk about any of our suppliers specifically. We will continue to be purchasing silicon from multiple suppliers even after the 6N acquisition. There will be a huge focus to expand operations in 6N Silicon so that we can take advantage of that vertical integration, but they won’t be able to immediately supply us 100% anyhow.

The performance of our cells is basically the same as any of the leading cell manufacturers and then our advantage is we can provide it at a Tier 1 Chinese cost.

Calisolar sells their solar cells as plug and play compatible with cells already on the market, and no module design changes should be required. A Calisolar cell datasheet has not yet been published on their website.

Depending on the module design, module efficiency is about 1.5% lower, so 16.5% solar cell efficiency translates to about 15% at the module level. Calisolar reports 60 cell modules ordered for testing achieved 215 to 225 Watt ratings. In accelerated life testing, Calisolar says the modules have performed just like multicrystalline silicon. By targeting historical issues with UMG-Si, Calisolar claims to have improved existing techniques across silicon, wafer, and cell processing.

Multiple customers are qualifying Calisolar cells for production and are expected to introduce modules in the second quarter of 2010. With a global customer base, Calisolar is exporting solar cells around the world including China. In fact, a customer has begun building modules now and will begin shipments within around three to four weeks to initial applications not requiring certification. One customer (perhaps the same one?) has a module in certification, while a handful of customers are about ready to submit modules for the certification process.

When I asked her about the later statement, Dr. Symko-Davies said Calisolar had accomplished all of their Phase I and Phase II PV Incubator milestones. 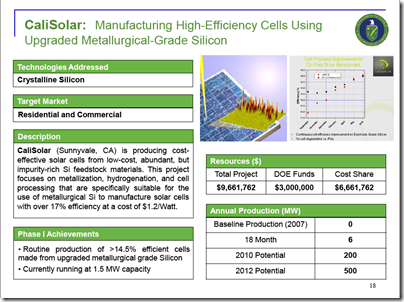 If cost and price competitive silicon solar cells can be made in California, they could be made anywhere.