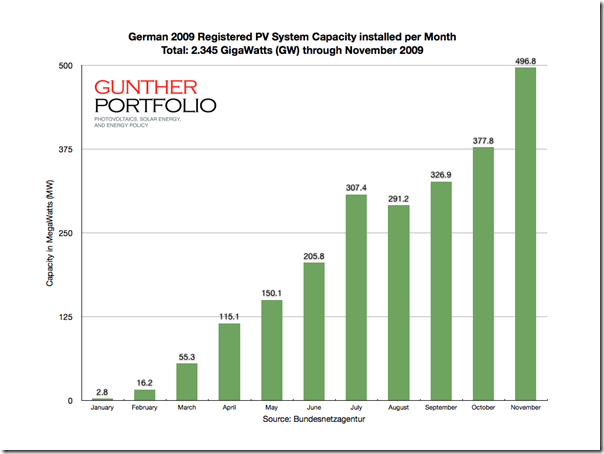 What will the December registrations bring to the final German 2009 PV installation tally? While a sub 3 GW number seems realistic, was there a huge November work in progress pipeline and how did the arrival of winter and the holidays impact the second half of December? Mark Osborne at PV-tech.org got me watching the German weather daily and on December 17, 2009, I tweeted:

Does comparing the registration data from October and November reveal any trends? Although the German PV market sweet spot remained 10 kW (kiloWatt) to 100 kW sized systems as shown in the table, PV systems greater than 1 MW more than doubled in system capacity versus a registration increase of just over 35% from 17 to 23. The results were skewed by the registration of the 50.99 MW system in Straßkirchen, Bayern (Bavaria), built by a joint venture between MEMC Electronic Materials and Q-Cells International and ranked the second largest PV power plant in the world by pvresources.com as of today.

At the other end of the spectrum, the smallest installation was 140 Watt-peak, yes Watts, maybe a single module, located in Aachen, Germany, albeit at a different postal code than PHOTON Europe. Even with the Straßkirchen PV plant, PV systems sized 100 kW and smaller accounted for almost 70% of German installations in November.

The German Solar Industry Association (Bundesverbandes Solarwirtschaft, BSW) has launched the Solar made in Germany website to organize opposition to proposed FiT (Feed-in Tariff) cuts and encourage PV supporters to sign a “Solar made in Germany” petition (UNTERSTÜTZEN, Germany only). Perhaps I should invoke my dual citizenship and sign up using the town of my last Abmeldung?