Silicon metal production and pricing has recovered driven by base industries, electronics, and Photovoltaic (PV) solar demand.
What about the Globe Specialty Metals and Dow Corning deal?
Dow Corning has been quiet about Upgraded Metallurgical Silicon (UMG-Si).

Silicon metal supply contracts and production expansion are but the latest signals of demand recovery for the commodity raw material from aluminum, chemical, and polysilicon for the electronics and PV industries. In fact, silicon metal is a primary feedstock for every polysilicon, solar grade silicon, or UMG-Si production process except one. Per the charts below from MetalPrices.com, 98.5% pure chemical grade type silicon metal pricing in dollars per kilogram ($/kg) has had a slight rebound in the US and a strong recovery in low cost China, a subject of antidumping reviews.

Although Dow Corning Corporation “relies on chemical grade silicon as an essential raw material to manufacture nearly all of its more than 7,000 products”, I observe the Alloy, West Virginia, silicon metal facility could minimize transport logistics to Hemlock Semiconductor Group’s $1.2 Billion, 10000 MT polysilicon plant under construction some 445 miles away in Clarksville, Tennessee USA.

I am glad to already announce that we have now launched our next generation material, Dow Corning® PV-1201. 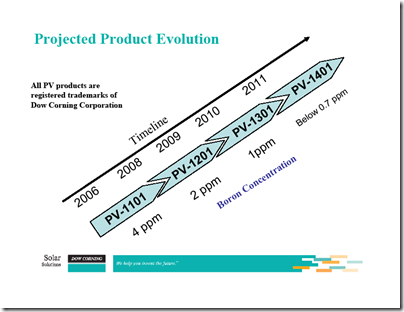 PV-1201 is supposed to have half the impurities of Dow Corning’s PV-1101 SoG (Solar Grade) Silicon but the 2 ppmw (part per million by weight) Boron concentration still requires polysilicon blend ratios of at least a three to one (3:1). Acknowledging this, Dr. Gaëtan Borgers said:

If you want to use UMG at 100%, it will be necessary to go below 0.5 ppmw of Boron and below 1 ppmw of Phosphorus. 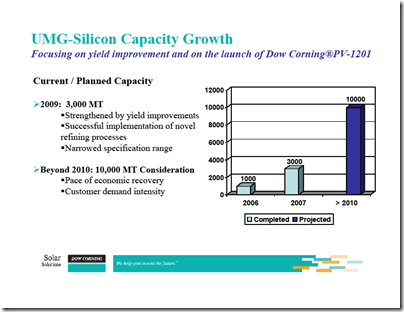 As a result of the recession, Dow Corning expected to delay the next expansion of UMG-Si production capacity to 10000 MT until after 2010 based on customer demand. Focusing on yield improvement and the launch of PV-1201, Dr. Borgers said:

Obviously we are not there yet, but what I want to highlight is that by the end of this year, we intend to be at the 1 ppm level.

Before the 24th EU PVSEC, I asked Dow Corning for an update on PV-1201. In a polite way, Dow Corning told me the material development was proprietary, and only existing customers would get progress updates. Over five months later, Dow Corning won’t answer the same question, and information still cannot be found regarding PV-1201 or even a mention the product name, “PV-1201”, on the Dow Corning website.

So where and what is up with PV-1201? I guess Dow Corning will bless us all with an update at PHOTON’s 8th Solar Silicon Conference in Stuttgart on April 27, 2010.