I didn’t want all the juicy Nanosolar, Inc. tidbits overshadowed by Governor Arnold Schwarzenegger, so I decided from the start Nanosolar solar Musings required a second post.

09-09-09: Million or MegaWatt?
I might be reaching here, but I perceived a nuance in the original announcement of serial production using a “monthly run rate of 1 million cells” and 1 MegaWatt (MW) interchangably. “Nanosolar Starts High Volume Production, Opens the Kimono A Bit” by Katie Fehrenbacher at Earth2Tech said:

Nanosolar says it now has a monthly production run rate of “1 million cells per month.”

I confirmed the same fact with Nanosolar at the time of the announcement although 1 MW per month production was reported in numerous outlets.

We’re producing about a Megawatt a month right now.

I count 84 CIGS (copper indium gallium diselenide) cells (14 by 6) in a Nanosolar Utility Panel, and per the Data Sheet each panel is rated from 160 to 220 Watts. So each cell ranges from 1.9 to 2.6 Watts, and 1 million cells corresponds to about 1.9 to 2.6 MW or almost 11905 panels. By the same calculations, 1 MW of production requires about 500000 cells. In a leap of pure conjecture, I wonder if 1 million cells were needed to build a MegaWatt of panels implying a 50% or worse cell yield?

Luckenwalde 1 MW Solar Farm
What has happened since In Search of Nanosolar GmbH – Part 3? At the end of 2009, my sources indicated there had been little progress. I asked Nanosolar about the status in early 2010 but I never got an acknowledgement or response. I’ve been waiting for the Bundesnetzagentur (German Federal Network Agency) EEG related photovoltaic (PV) system registration data for December 2009 to be certain. I nodded in complete agreement when “German government official claims 3GW of solar modules installed in 2009: expects 5GW in 2010” by Mark Osborne at PVtech.org said:

The official figures have yet to be released, with many industry observers believing the figures are being withheld until proposed feed-in tariff cuts gain full authorization.

I might be over obsessed with the Luckenwalde solar plant, but it was first supposed to be completed by year end 2008 and then year end 2009. Priorities can shift and modules may command a higher price in other European countries, but why wouldn’t Nanosolar want to complete a 1 MegaWatt PV reference project within walking distance of the Nanosolar GmbH panel factory in a country with a lucrative 2009 Feed-in Tariff? 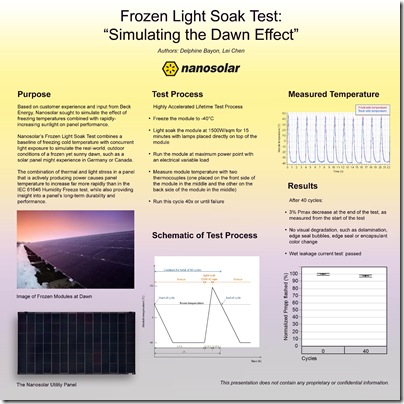 Based on customer experience and input from Beck Energy, Nanosolar sought to simulate the effect of freezing temperatures combined with rapidly-increasing sunlight on panel performance.

While a “Highly Accelerated Lifetime Test Process” is outlined, is the illustrative “Image of Frozen Module at Dawn” from the Luckenwalde solar plant just this winter or another location?

At the Environmental Business Cluster Creative Financing for Cleantech panel event held in December 2009, I asked Nanosolar Vice President of Corporate Development Brian Sager about the compatibility of power electronics with the Nanosolar Edge Connector. He did not believe per panel power electronics were a factor in utility scale solar power plants. While I’ll concede he is correct about utility scale PV for now, commercial rooftop installations are poised to adopt per panel power electronics to solve panel mismatch, fixed string length, and shading issues in the near term.

By the way, Brian Sager has a personal website at http://www.briansager.com.

Per “Antritt-Gastgeber Nanosolar öffnet seine Türen für die Öffentlichkeit” (German only) by Frank Neßler for the Märkische Allgemeine, Nanosolar is an official sponsor of the 5th annual Antritt 2010 bike race organized by RadTeam Seidel (RTS). Here’s a scan of the press clipping showing Nanosolar GmbH Managing Director Olaf Dany in front of the factory. The race begins and ends at Nanosolar GmbH followed by a small Fest and open house tours of the panel factory to raise awareness of the firm and encourage youth to apply for solar trainee programs.

In a twist of photovoltaic irony, I have been visiting the town of Luckenwalde on an almost annual basis since 1996. Too bad I’m not around Sunday to get a factory tour.