“The polysilicon industry will face a major shakeout in 2011.” 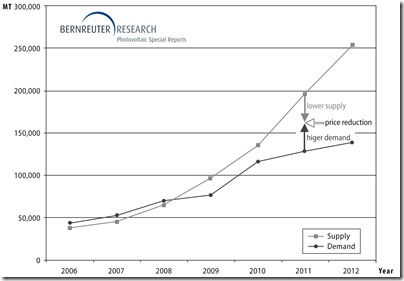 Co-authored by Johannes Bernreuter and Frank Haugwitz, The Who’s Who of Solar Silicon Production predicts the “pressure on the silicon price will likely be limited this year” because of the “upside potential for demand in important PV markets in 2010.”

However, per the Bernreuter Research Polysilicon Supply-Demand chart shown, there is the potential for ~75000 MT (Metric Ton) of polysilicon oversupply in 2011. China alone could produce 80000 MT of polysilicon by 2012 or about one third of global supply. The twenty (20) smallest polysilicon manufacturers with at most 1500 MT of annual capacity are identified as the most vulnerable to the impending consolidation.

None of them will challenge the Siemens process in the short term. In particular, fluidized bed reactor technology has not delivered on its promise of lower manufacturing costs. 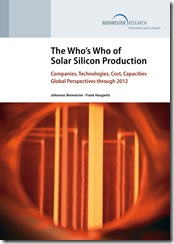 In addition, Bernreuter Research said “upgraded metallurgical-grade (UMG) silicon will only play a marginal role with a market share of less than one percent through 2012.” After just holding a grand opening ceremony with California Governor Arnold Schwarzenegger, Calisolar might chose to dispute that statement.

The Solar Silicon Info brief of the report includes an executive summary and a table of contents, listing 96 company profiles and 54 project reviews, as well as three sample company profiles. Many questions spring to my mind just reviewing the table of contents. I’ve never had a good grasp of the Chinese polysilicon industry, and I also wonder if the report answers a certain question I have about Schmid Silicon Technology.

A hard copy of The Who’s Who of Solar Silicon Production can be ordered here for an early bird discount price of €850 until April 30, 2010, and €950 afterwards.

Interest in solar silicon is back! Solar Polysilicon Oversupply until 2013? has trended to become the second most read post on GUNTHER Portfolio in 2010. All this silicon talk just increases my anticipation about attending PHOTON’s 8th Solar Silicon Conference on April 27, 2010, in Stuttgart, Germany.