After missing deadlines in early March and then the end of March, on Friday, April 9, 2010, the Bundesnetzagentur (German Federal Network Agency) released preliminary EEG related PV system registration data for December 2009. Perhaps someone noticed my tweet?! 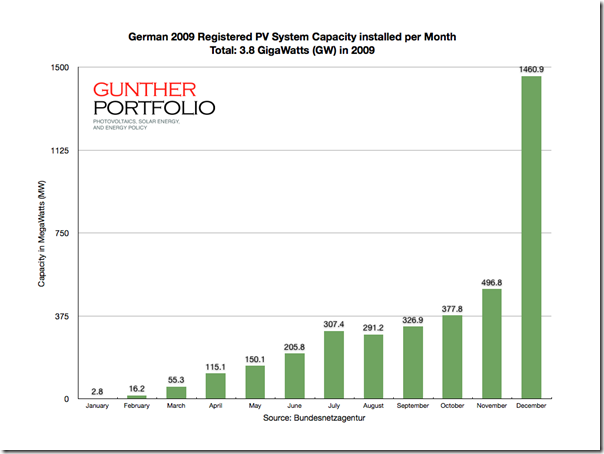 As shown in the chart above, German 2009 PV installations of 1.4609 GW in December 2009 were off the chart since German Photovoltaic installs topped 2.34 GW through November in a literal sense reducing January’s 2.8 MW (MegaWatt) of installs to PV noise. December PV installs almost tripled from 496.8 MW in November increasing 194%. Registrations almost doubled increasing 90.3% from 22166 in November to 42188 in December. German PV installers must have been looking forward to the holidays and a relaxing January.

Likewise, the “Photon Magazine survey puts German PV installations as high as 4GW” was close to the mark. PHOTON has been the subject of intense industry bashing over the German forecasts and their proactive political role in influencing the mid 2010 Feed-in Tariff (FiT) reductions in Germany. For example, please see the PHOTON press release “Solarstrom-Magazin PHOTON: Anpassung der Solarstromvergütung sichert langfristiges Marktwachstum in Deutschland” (German only).

December 2009 Registration Data
Capacity growth skewed towards PV systems 100 kW (kiloWatt) and larger representing 46.9% of the December 2009 installed capacity mix versus just 30.5% in November 2009. The 500 kW to 1 MW segment grew almost seven fold from November 2009, at least in part because 18 of the total 178 registrations were sized between 990 and 999.9 kW, avoiding the MegaWatt label. The largest PV system installed was 20.49 MW in Rothenburg, Sachsen, and it’s already listed at pvresouces.com.

By the way, the German Federal Network Agency now claims preliminary PV registration data from January and February 2010 will be released this month.

However, Bavaria is also not uniform and diverse microclimates exist. Nonetheless, insolation challenges did not prevent the December installation of a 7.56 kW PV system in Schwarzenbach a. Wald located in northern Bavaria even though two of my cousins tell me solar makes no sense in the town. I wonder if the system owner got a good deal on amorphous silicon modules?