The TEC-Institut is co-located, funded, and has the same Managing Director as ANTARIS SOLAR. 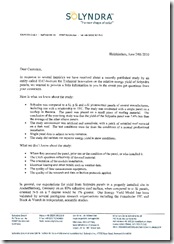 Due diligence responses and Solyndra customer feedback on the TEC-Institut report started rolling in after I posted Solyndra underperforms in Photovoltaic Module Test. The TEC-Institut appears to obtain direct and indirect funding from Dr. Michael Göde, the Managing Director of both the TEC-Institut and ANTARIS SOLAR. While I am not certain, I think the ANTARIS funding may be in the form of contracts while additional funding appears to be provided by the Göde Wissenschafts – Stiftung or Science Foundation established by the same Dr. Göde.

The Göde Science Foundation’s major thrust is antigravity research via the Institute for Gravityresearch and the related €1 million Göde Prize for Gravity Research (FAZ) modeled after the X PRIZE. Dr. Göde built his wealth founding and growing the Bayerisches Münzkontor into “the world’s third largest mail order company for collector’s items” again all at the same location in Waldaschaff, Germany.

In response to several inquiries we have received about a recently published study by an entity called TEC Institute for Technical Innovation on the relative energy yield of Solyndra panels, we wanted to provide a little information to you in the event you get questions from your customers.

Here is what we know about the study:

What we don’t know about the study:

In general, our expectations for yield from Solyndra panels in a properly installed site in Aschaffenburg, Germany on an 80% reflective roof surface, when compared to c- Si panels, oriented N-S on a 7 degree would be 1% greater. Our Energy Yield Model has been validated by several prestigious research organizations including the Fraunhofer ISE and Black & Veatch in independent, scientific studies.

We have reached out to the TEC Institute for more information on the test study and they have not responded to date. In attempting to contact them we were informed that the TEC Institute appears to be affiliated with Antaris Solar, a manufacturer of crystalline silicon solar panels, and located at the same address. We will update you in the future should we receive any relevant information from them.

We would be happy to discuss the energy yield of our panels compared to C-Si panels with you or your customers should there be any questions or concerns. Please feel free to share this letter with your customers. We are confident that a Solyndra system, properly designed and installed will deliver the results you and your customers expect and that, when combined with our ease of installation, light weight, and other advantages, is the best choice for your rooftop applications.

Another customer sent me a technical critique along with Solyndra versus BP Solar test data collected over a period of 15 months. I posted the critique and test data as a Blog comment.

I also tried contacting both the TEC-Institut and ANTARIS SOLAR late last week for a conference call, and my requests have not yet been acknowledged.