The TEC-Institut für technische Innovationen test was conducted over a twelve (12) month period from March 1, 2009, through February 28, 2010, and the results are summarized in the June 2010 report:

Do the tube modules deliver what they promise?
Comparison of the annual yield of the “Solyndra” CIGS module with conventional PV modules (Google English)

From the outset, the report claims the Solyndra module’s shadow blocked most if not all of the sunlight before hitting the reflector foil installed below the module, allowing only a small portion of reflected sunlight to hit the backside of the module. I wonder about the installation of the module with a like sized reflector foil though. While I assume Solyndra has a specification for the white roof margin required around their modules, the Fast, Easy, Cost-Effective Installations page of the Solyndra website makes no mention of roof preparation nor is an installation guide available for download.

Adjusting the kiloWatt-hours (kWh) generated by the kiloWatt-peak (kWp) capacity of each PV technology, the Solyndra module underperformed each of the other flat plate modules including a-Si over the year period. 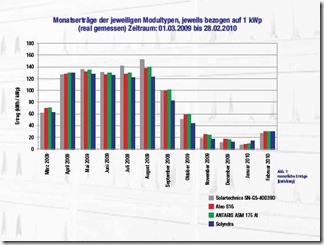 The Solyndra module only outperformed the silicon modules by a significant margin in the month of January 2010. Snow covered the PV modules and roof for extended periods in January. Solyndra outperformed because the snow melted from the Solyndra modules faster than the flat plate modules, and the roof snow increased the amount of reflected light reaching the back of the module. However, the one month had a minimal impact on the annual results. The TEC-Institut report goes on to claim the Solyndra module’s actual performance on an area basis was six (6) percentage points less than the expected results predicted from the datasheet specification normalized to the monocrystalline module. I’m not familiar with the TEC-Institut folks, so I’ll reserve judgment on their results, but I would prefer to see the raw, unadjusted data to double check that last calculation.

If the report’s results are confirmed, is there really a market for a more expensive, easy to install, yet low performing PV module with higher O&M (Operations and Maintenance) expenses?

Please note Solyndra’s datasheet disclaimer may explain some of the performance variances:

Also, ongoing improvements may already have boosted Solyndra production module performance since the test module was procured around February 2009. I’ve asked Solyndra about the report and expect they will respond as warranted once Father’s Day winds down.

Please vote in the new PV POLL: How does the GUNTHER Portfolio Photovoltaics Blog redesign strike you?