March Photovoltaic (PV) installs double to 328 MegaWatts-peak (MWp) from the February 162 MWp trough.
Setting up for a record Second Quarter. 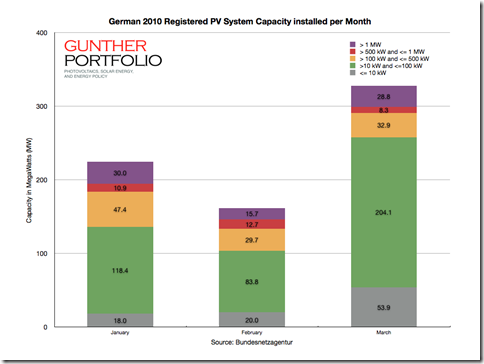 I’ve been checking the Bundesnetzagentur (German Federal Network Agency) website almost daily for the release of the preliminary EEG related PV system registration data for March 2010. On the one day I was too busy to check, it was released. A kind reader alerted me to the event via email.

With the extreme German winter season, the spring thaw is almost certain to be postponed until late April or May. I have to wonder what iSuppli was thinking when proposing a fourth quarter response to the April 1 FiT revisions in the dead of winter? “iSuppli forecasts impact of Germany’s FiT cuts in 2010” by Mark Osborne at PV-tech.org includes a chart displaying iSuppli’s first quarter 2010 PV installation forecast of 200 MegaWatts (MW) in January, 300 MW in February, and a whopping 600 MW installed in March before the FiT reduction. I don’t believe the forecast is realistic even if Groundhog Day has a positive outcome.

Please note how unrealistic the original iSuppli 2010 PV forecast for Germany has proven versus the actual first quarter installations. I don’t believe the FiT reduction delay was a factor here.

March 2010 Registration Data
In addition to installs doubling, March registrations increased 158% to 16921 from 6552 in February. The capacity mix skewed towards rooftops with PV systems sized 100 kW (kiloWatt) and smaller representing about 78.7% of the March 2010 installs. The largest PV system installed was 7.12 MWp in Allmannshofen, Bayern, while the smallest was 225 Watt-peak (a single module?) in Leipzig, Sachsen.

German market demand incorporates substantial volatility in quarter-on-quarter performance during 2010. This takes account of the uncertainty of policy adjustments in Germany that are planned for July 1 and also January 2011.