As folks have noticed, the Blog has been quiet since about mid August until the end of the 25th European Photovoltaic Solar Energy Conference and Exhibition (25th EU PVSEC). Those not following me on twitter or ignoring the twitter Weekly Digest posts missed my explanatory tweet:

Where are the Photovoltaic Blog posts? On hold! I am in a frenzy preparing my paper and presentation for EU PVSEC
8:53 PM Aug 27th via TweetDeck

My EU PVSEC Oral Presentation was first up at 08:30 AM on Wednesday, September 8, 2010, in Topic 6 – PV Taking Off: Large-Scale Deployment and was titled “US PV Market Development in the American Southwest”.

I’ll begin at the end with my Utility Scale PV Project Summary and then detail the survey results for each state. 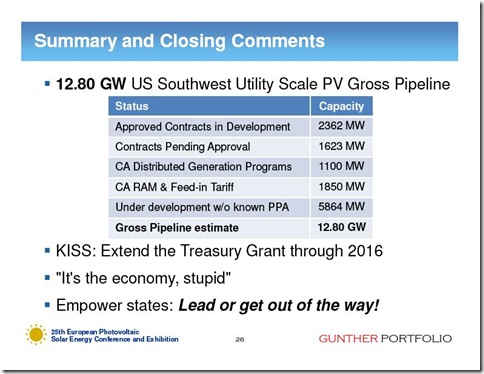 In the US Southwestern states of New Mexico, Nevada, Arizona, and California, Utility Scale PV has an estimated gross project pipeline of 12.8 GigaWatts (GW) as shown in the above Summary and Closing Comments slide. About 3.462 GW of this pipeline are Approved RPS (Renewable Portfolio Standard) Contracts or Distributed Generation (DG) programs that will be installed over a four to five year period. The California RAM (Renewable Auction Mechanism) and Feed-in Tariff programs appear poised to install another 1.85 GW over four years. Most of the 1.623 GW of PV Contracts Pending Approval will translate into real projects, and a majority of the projects Under development without a known PPA will be constructed despite some BLM (Bureau of Land Management) application speculation. 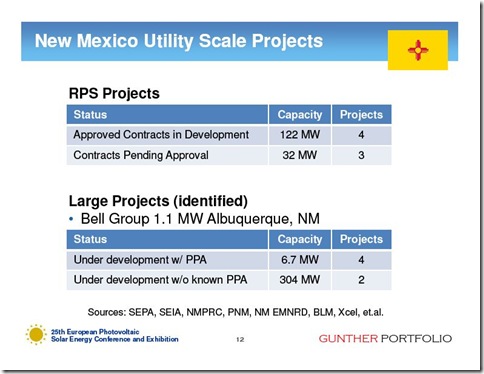 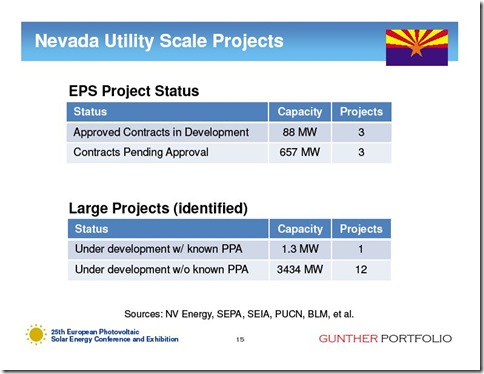 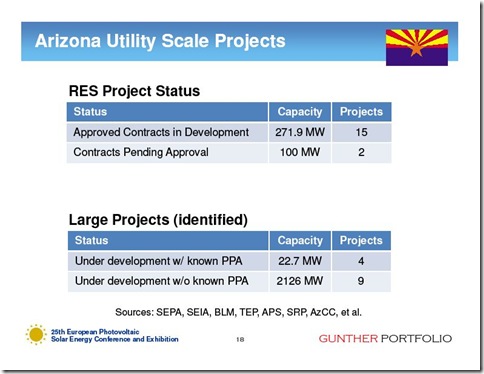 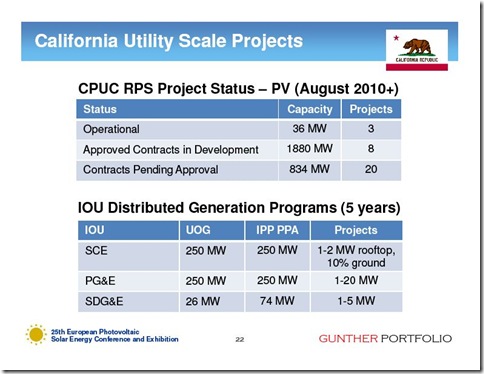 California
California has the strongest and most transparent PV RPS pipeline in the United States. The California Public Utility Commission (CPUC) is the only public utility commission of the four states surveyed to maintain an online Status list of RPS Projects updated on a monthly basis.

California has 1880 MW of RPS Approved Contracts in Development for PV and about 834 MW of PV Contracts Pending Approval by the CPUC as shown in the California RPS Utility Scale PV Projects slide. Two Southern California Edison (SCE), an Edison International (NYSE:EIX) company, projects with First Solar, Inc. (NASDAQ:FSLR), the 250 MW Desert Sunlight and 300 MW Desert Stateline projects, were approved by the CPUC on September 2, 2010, tilting the PV pipeline to approved from balanced with pending.

The Sacramento Municipal Utility District (SMUD) implemented a 100 MW Feed-in Tariff program with a standard contract PPA that was booked after 8 days in January 2010. At the CPUC, a proposed decision has been released for a Renewable Auction Mechanism “Feed-in Tariff” that looks like a biannual binding RFP (Request for Proposal) process for 1 GW of PV administered by the IOUs over a period of four years for systems sized 1.5 MW to 10 MW and 10 MW to 20 MW. SB 32 amends an existing CPUC Feed-in Tariff program by raising the cap to 750 MW for projects up to 3 MW and setting the tariff at avoided cost plus environmental and DG benefits. California Feed-in Tariff programs have the realistic potential to add 1.85 GW to the state’s PV project pipeline.

With the flurry of recent PV project news, I needed to post my numbers, accurate as of September 2, 2010, before they were stale. I expect a few more posts will result from my twenty-seven slide presentation.