Completed 2010 Non-Residential Photovoltaic (PV) installations are down almost 27% versus the same period of 2009.
Is the application pipeline setting up for a record first half 2011? 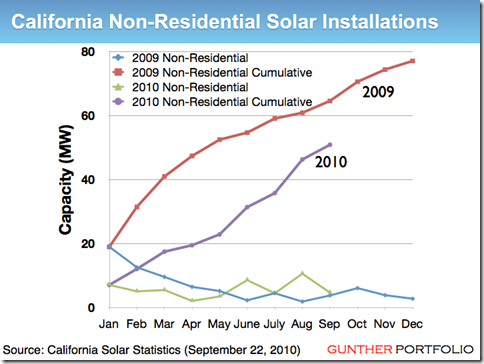 The Non-Residential Application pipeline also plays a role in the timing of completed installations. In “The CPUC’s CSI in Pictures: An update through March 2010”, SunCentric Inc. CEO Glenn Harris said:

While the April 109.8 MW spike in 2010 Non-Residential applications was reported via many outlets, the 350 day average project duration implies these applications will not result in completed projects until the first quarter 2011. Per the “California Solar Initiative Progress Report March 2010 Data Annex” report:

The CSI dropout rate is currently about 18.7%. As of 12/30/2009, about 18.7% percent of reserved MW has dropped out of the Program, representing 19.9% of reserved incentive dollars. This average dropout rate was calculated from the Public Data Export, which draws on data from the 12/30/2009, PowerClerk data, and includes only those applications that have ever been granted a CSI reservation (non-blank “Reservation Reserved” or “Confirmed Reservation” or “Pending RFP” date for non- residential projects, and non-blank “Confirmed Reservation” date for residential projects). 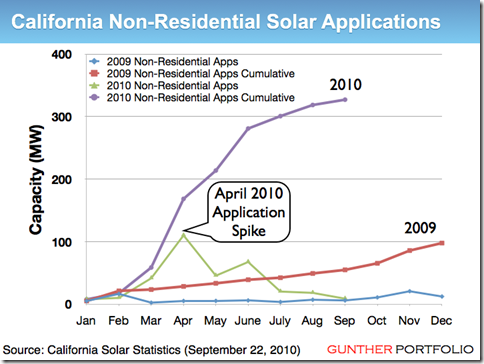 Second, CSI Non-Residential PBI (Performance Based Incentive) levels have been dropping and according to the CSI Statewide Trigger Point Tracker are at Step 8 for Pacific Gas and Electric Company (PG&E) and Step 7 for Southern California Edison (SCE) and the California Center for Sustainable Energy (CCSE), the administrator for San Diego Gas & Electric Company (SDG&E) customers. The CSI PBI Payments per kWh (kiloWatt-hour) for Non-Residential Steps 7 and 8 are shown at the bottom of my EU PVSEC California PV Market slide. I understand clever developers began focusing on Government / Non-Profit solar installations to benefit from the additional $0.10 per kWh PBI. 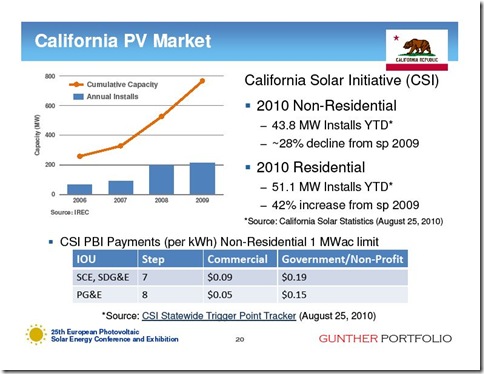 The September 16, 2010 presentation on the Status of the CSI Program (“California’s Solar Market”) by Molly Sterkel, CPUC Energy Division, observes CSI Installed and Pending Projects account for $1,432 million of the $1,701 million CSI budget and concludes with a “Post-CSI?” slide including the bullet point, “Lower steps cost program least, expected to obtain the most MWs”. Let’s hope so or a tough and not so sustainable solar PV market may unfold in the second half of 2011 or in 2012. 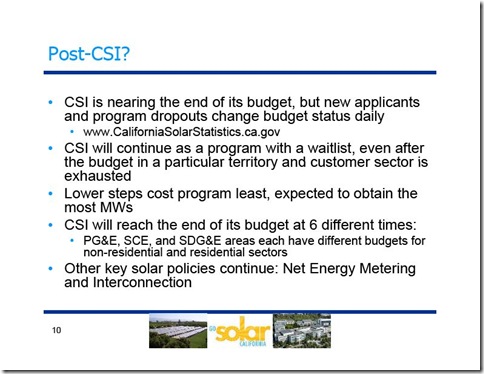