Even though I promised to post about Morgan Solar Inc. last year in SPI 09: Concentrating PhotoVoltaics Highlights, I am just getting around to it after Solar Power International 10 (SPI 10). In fact, I interviewed Morgan Solar Vice-President, Business Development and Marketing, Nicolas Morgan, before SPI 10 began.

“When I first started to get a real sense of what Morgan Solar had accomplished, it blew my mind. The more I dug into the details, the more clear it became that these guys had really developed a game changer.”

Current Test Sites
When I asked Nicolas Morgan about the status of the “Sun Simba Test Site Install”, Nic Morgan said: “There are actually a couple of test sites.” Among others, Morgan Solar has an established partnership with the University of Ottawa SUNLab which was pleased to add a local CPV systems partner. Morgan Solar has not deployed large numbers of panels for testing to date though test installations are planned to ramp up in 2011 as will be discussed later. 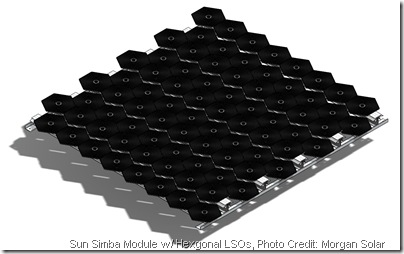 At SPI 10, Morgan Solar had four (4) fully functional panels on display at their expo booth versus the two deliberate non-functional prototypes shown at SPI 09. While the panels featured the square Light-guide Solar Optic (LSO) design, I learned Morgan Solar has redesigned the LSO into a hexagonal shape to increase the active Sun Simba CPV module area and material efficiency as shown in the drawing. Since the Sun Simba LSOs are not framed, the hexagonal shape does not create the obvious voids present in the first generation SolFocus CPV modules. Morgan Solar has also been evaluating new heat sink designs to improve passive cooling surface area balanced by manufacturability considerations. One design example was part of the booth signage for those bothering to look.

Nic Morgan was careful not to set unrealistic expectations. A tool for the injection molded plastic optics “should be finalized in November”. As a diamond needle is used to cut the mold with extreme precision, the process sometimes needs to be restarted leading to minor delays. Once the mold is trained and optics are produced, the first panels will be assembled and tested at Morgan Solar’s Toronto Canada facility for about six to ten weeks to determine if the panels are ready for certification. Morgan Solar expects to submit panels for certification as early as the end of 2010 but no later than the first quarter 2011. In particular, the UV and outdoor test of IEC 62108 can take up to 9 months to complete and any failures require the test cycle to restart.

In addition, a 100 kW installation is planned for Port Dover, Ontario, Canada, a test site of unspecified size in Spain, and potential test systems may be located in the Middle East, India, and other US locations. Individual panels and very small installs (~2 kW) are slated for testing by the University of Ottawa SUNLab and the National Renewable Energy Laboratory (NREL).

The startup has picked Chula Vista, Calif., as the location for its factory to produce optics for its concentrating PV system starting in spring 2011. The company has a panel assembly facility at its headquarters. The overall plan is to run a manufacturing operation that can produce up to 35 megawatts of solar panels per year in 2011, he said.

Morgan Solar could not discuss the details of this loan as they are still negotiating the contracts with the CEC but reiterated the program was designed to create green jobs in solar energy via manufacturing equipment loans. Morgan Solar said panel assembly will continue at their facility in Canada indefinitely, although additional manufacturing capacity will have to be brought online soon, some or all of which could be in California.

Morgan Solar intends to start rolling out the first commercial Sun Simba CPV systems shortly after the trial systems. Bullish early adopters of small scale, self financed CPV projects will be the initial target focus and a first step on the path from market ready CPV systems to full bankability.

Morgan Solar is =the= company to watch for a breakaway from the HCPV (High Concentration PhotoVoltaic) pack to join market leaders Amonix, SolFocus, and Concentrix Solar.