The Cogenra Solar cogeneration system was found switched OFF two days after the commissioning celebration.

When I saw the announcement, I knew Graton would be on my weekend itinerary. After making the field trip up to Graton from the South Bay, I was disappointed to find the fifteen (15) Cogenra SunBase modules stowed like battle droids facing away from the sun as shown in the Picasa slideshow. The Bloomberg TV video “Khosla Sees Opportunity in Cogenra Hybrid Solar System” does show the system in operation as do photos at the Cogenra Solar Case Study webpage. Dr. Almogy answers questions about annual savings by the SWC, installation cost, and system payback with generalizations instead of the hard numbers Bloomberg TV interviewer Cris Valerio expected.

Am I unrealistic or naive to believe a system will be in near daily operation once commissioned? In his remarks at the event, Cogenra CEO Almogy said:

This is a very significant milestone for Cogenra as we bring our first project online in California’s wine country and toast to a bright future with solar cogeneration.

Similar statements were made by Dr. Almogy in subsequent press interviews. Just one day after his “Khosla on Hype and Opportunity in the Smart Grid” presentation at GreenBeat 2010, Mr. Khosla is found engaging in a bit of solar cogeneration Hype of his own.

Final interconnection, inspection, or performance testing could be to blame for the system not being online. Since the SWC Graton facility was closed on Saturday, and I expect it had limited hot water requirements, I began to consider other practical issues. Although the mid Concentration PhotoVoltaic (CPV) portion of the Cogenra system can leverage the least common denominator policy of net metering to match electricity generation and consumption over an annual period, the hot water generated must be used or stored on site. In periods of low hot water demand, can the CPV portion of the Cogenra Solar system operate in a closed loop fashion without pumping water out of the Preheat Tank? The Cogenra Solar Site Integration diagram does not indicate the existence of a closed loop CPV operation option though it may well be supported. 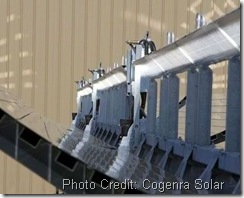 The Cogenra SunBase modules as installed at the SWC can be described as Parabolic Linear Fresnel Reflectors (PLFR) oriented lengthwise in a North to South direction and following the sun from east to west with single axis tracking. The narrow photovoltaic modules are mounted on two sides of the inverted triangle receiver facing the PLFR. I have not seen the SunBase modules in operation, but the inset Cogenra photo taken at the SWC site appears genuine and shows rather impressive even illumination of the PV modules by the PLFR. In fact, mirror image reflections of the PV modules can be seen when peering into the PLFR from the receiver direction. The PV modules are cooled by what Cogenra calls a glycol mixture circulated through a Preheat Tank to heat water and cool the glycol mixture for reuse.

Please note the 272 kW system capacity number is a very subjective performance rating that encompasses both solar electric and thermal capacity. Cogenra Solar has not released a datasheet on the SunBase modules or systems. The Cogenra SWC press release said:

Since silicon solar cell power output decreases at higher operating temperatures because of the negative temperature coefficient while also increasing module degradation rates, a thermodynamic tradeoff exists between solar electric power generation and heat extraction via module cooling with the glycol mixture. Efficient solar electric power generation dictates some 25 to 30 °C of the Cogenra’s quoted 73.8 °C must be obtained by direct solar heating of the glycol mixture.

Cogenra Solar has not discussed the solar thermal aspect of the system in any detail. How Solar Cogen Works states “Heat energy captured for solar hot water and to cool PV cells for optimal efficiency” and:

Thus far, a lone Cogenra Solar patent from the extensive portfolio has been published under the old Skywatch Energy company name at the World Intellectual Property Organization (WIPO) as shown below and the United States Patent and Trademark Office (USPTO):

I asked SWC neighbor Maureen Lomasney, President and Founder of Art Honors Life | The Gallery at FUNERIA, about the celebration and the Cogenra Solar system. Other than Scotland Yard making their presence known securing the area for Mr. Blair’s visit, it does not sound as though many Graton residents were invited to the exclusive event.