Per the Global Forecast to 2014 slide shown below, Navigant estimates 2010 shipments of 16.1 GW while estimated installations are a bit lower. Ms. Mints said: “My forecast right now is in flux because I‘m not done counting 2010.” 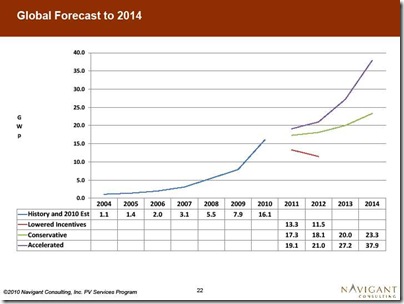 Where can you put this stuff (again)?
For the worldwide PV forecast, Ms. Mints said: “2011 is somewhere between 17 GW and 20 GW. In 2012, it starts to be a more problematic vision for me so I’m going to be spending a lot of time looking at that going forward.” The 2011 range is consistent with the Conservative and Accelerated demand forecasts of 17.3 GW and 19.1 GW respectively. 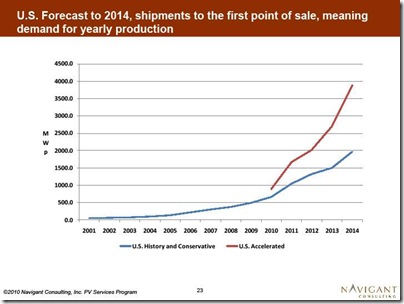 Paula Mints said: “The US, I do see moving into accelerated mode, that means it is becoming the market of interest.” Observing the US is “a relatively stable market”, the 2011 US forecast should be between 1.5 GW and 2 GW with a strong growth prognosis.

I’m starting to also factor into my forecast all solar technologies. So this is not going to be all PV at the end.

When Incentives are set more by an Auction process, which naturally leads towards lower margins, by the way no matter what anybody says, you are going to find that competition is going to get even more strident between the solar technologies.

The Vote Solar Blog post “Webinar: Paula Mints on Global PV Demand in 2011 and Beyond” has links to the webinar recording, presentation, and captures the Questions and Answer session afterwards.

Eureka! This captured my thinking in the fourth quarter of 2009 when I wrote two Blog posts about the evolving PV market in the second half of the year.

I don’t take issue with forecast updates being required to keep up with rapid developments in the dynamic PV market. However, I do expect forecasts to be updated when market dynamics change and an inflection point occurs. Over the past year, I observed Navigant, Solarbuzz, iSuppli and IMS Research have all modified their 2010 PV forecasts at various times.

The renewed German PV Feed-in Tariff Frenzy is one such market dynamic. “More Solar Subsidy Cuts on Deck in Germany” by Eric Rosenbaum at the TheStreet.com discusses the variable Feed-in Tariff (FiT) proposal being considered in Germany that adjusts the degression again mid 2011 based on PV installations between March and May.