I like to wait for the start of the New Year before writing my annual photovoltaic (PV) trends and predictions post, but, in 2011, I’ve procrastinated a bit too long. 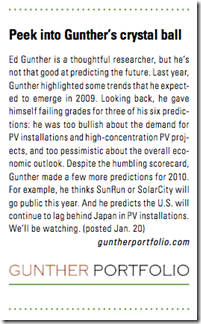 Ed Gunther is a thoughtful researcher, but he’s not that good at predicting the future. Last year, Gunther highlighted some trends that he expected to emerge in 2009. Looking back, he gave himself failing grades for three of his six predictions: he was too bullish about the demand for PV installations and high-concentration PV projects, and too pessimistic about the overall economic outlook.

At first, I thought I would earn a Fail here until I just noticed the “45% plus” phrase. Honestly, no, I did not envision 2010 PV installations more than doubling at the time. Here is a current roundup of 2010 PV installation market research numbers: IMS Research 17.5 GW, iSuppli 15.8 GW, Navigant Consulting 16.1 GW, and Solarbuzz 16.3 GW.

In the second part of the prediction, I said:

I also forecast Japan will install more PV than the United States in 2010 due to their improved and simpler support schemes.

Well informed sources estimate 950 MW (MegaWatt) of 2010 PV installations in Japan, while the best US estimate is “total 2010 demand of 855 MW” by Greentech Media Research. I’ll have to monitor these numbers as they settle out over the next few months.

In 2011, I predict at least 35% global PV installation demand growth despite Feed-in Tariff (FiT) headwinds in Germany, Italy, France, the UK, Ontario, and the Czech Republic. I don’t see the US more than doubling again in 2011 so PV installations will be below 2 GW.

Polysilicon and solar grade silicon outlook
I did not make a prediction last year but asked a question:

In 2010, are polysilicon prices under pressure due to multiyear overcapacity and uncertain though declining FiTs? In “Poly-Si suppliers offer one-year contract quotes at US$55/kg, say Taiwan makers” at DIGITIMES (subscription may be required), Nuying Huang and Adam Hwang reported long term polysilicon supply contracts were in the $60-70 per kg (kilogram) range amid speculation regarding potential $45-50 per kg short term contracts.

While contract prices have stabilized, 2010 polysilicon spot prices challenged the $100 per kg level as PV demand doubled over 2009. According to Bernreuter Research, “Polysilicon enables strong PV growth: Feedstock sufficient for 27.5 gigawatts in 2011”, and there is ample polysilicon available for above trend PV growth in 2011 though not quite another doubling of the market.

The upward adjusted figure accounts for the fact that Wacker Chemie AG has significantly revised its original 2010 polysilicon volume forecast from roughly 24,000 metric tons (MT) to about 30,000 MT and now expects a volume of 33,000 MT in 2011 versus 26,000 MT in our original projection for 2011.

I’ll hazard to guess polysilicon spot prices will remain below $100 per kg in 2011 if solar companies plan to make profitable PV modules for declining FiT end markets. Long term polysilicon supply contracts are the only way to be competitive in the PV industry if you are not vertically integrated. Please don’t forget to vote in the sidebar PV Poll: What will the average solar polysilicon spot price be in 2011?

Thin Film Photovoltaics
In my thin film statement, I said: “First Solar will remain the thin film PV king of the hill in 2010 and may well defend its title as the number one (1) PV module manufacturer.
Grade: Pass

However, First Solar may be the number two PV module manufacturer in 2010 behind Suntech Power Holdings Co., Ltd. (NYSE:STP).

At the beginning of last year, I thought Solyndra had joined the ranks of leading contenders for the »Second Solar«. How quickly the PV industry changes! In 2011, I eschew the CdTe (Cadmium Telluride) followers and assert MiaSolé and Solar Frontier are the thin film contenders to watch for signs of Second Solar emergence. I view Stion as a 2012 story.

CSP (Concentrating Solar Power)
Regarding CSP, all I said was:

In another OptiSolar moment, I said something nice about eSolar and the Sierra SunTower CSP plant only to find the eSolar Sierra SunTower Project offline when I stopped at the site on two consecutive days. I learned from Southern California Edison (SCE), an Edison International (NYSE:EIX) company, the “Sierra SunTower produced 24 MWh in 2009 and is forecasted to produce 1,563 MWh in 2010”. MWh denotes MegaWatt-hour.

In 2011, I predict another major southwestern US CSP project will fail because of legal or financing challenges or both.

First Solar utility scale PV projects in the desert southwest are not immune to legal challenges either.

HCPV (High Concentration PhotoVoltaics)
In my second rosy HCPV forecast, I said: “I predict at least 30 to 50 MWp (MegaWatt-peak) of HCPV must be installed in 2010, or HCPV is destined to remain Eric Wesoff’s pet zero billion-dollar market.”
Grade: Fail

Similar to “Update: $50M Funding Round for SolFocus CPV”, I am also hearing about 8 to 10 MW of high, medium, and low Concentration PV were installed in 2010. Eric Wesoff at Greentech Media said:

Nancy Hartsoch, VP at SolFocus, estimates that the amount of CPV shipped in 2010 will be 12 megawatts to 15 megawatts with an “installed base of about 8 megawatts.” She suggests that 2011 will see 100 megawatts shipped, a substantial growth curve.

According to a soon-to-be-released CPV report from GTM Research, annual CPV installations will grow from 2 megawatts in 2009 to 750 megawatts in 2015.

The Concentrated Photovoltaics Industry Report by CPV Today said: “CPV installations in the USA will grow from 1.5 MW to 75MW in the next five years. If installation patterns in the PV industry are anything to go by, this will represent just 8% of total CPV installations by 2015.” This implies the global CPV market will be about 937.5 MW by 2015.

The CPV industry became relevant in 2010, and Amonix, Inc. landed the largest deals including a 12 MW facility for Tucson Electric Power (TEP), a subsidiary of UniSource Energy Corporation (NYSE:UNS), a 30 MWac (MegaWatt alternating current) project developed by Cogentrix Energy for Public Service Company of Colorado (PSCo), a subsidiary of Xcel Energy Inc. (NYSE:XEL), and four (4) projects totaling 28.5 MW with Southern California Edison (SCE). The utilities don’t seem to be in a hurry to obtain power from these projects before the end of 2012 for TEP and 2013 and 2014 for SCE.

Instead of swinging for a CPV forecast strikeout, I’ll predict 2011 will be a record year for CPV start-up company failures as their funding runs out and investors lose patience with building better mousetraps while PV industry leaders like SunPower Corporation (NASDAQ:SPWRA) and maybe Trina Solar Limited (NYSE:TSL) decide to enter the medium and low Concentration PV market segments.

Oil
I said: “Despite the stubborn trade, I’ll predict oil will stay below $100 per barrel through 2010 anticipating the dollar to strengthen throughout the year.”
Grade: Pass

The 2010 per barrel oil price got close towards the end of year, but my price prediction held even if my currency rationale was off the mark.

I do think an oil price spike is possible, but I predict oil will stay below $135 per barrel through 2011 barring a force majeure event.

PV Industry Shakeout
I predicted “the PV “take under” trend will continue as faltering or failing firms are acquired for valuations well below their venture capital or equity funding since inception. Other acquirers will bottom fish in liquidation to acquire talent, know how, patents, and equipment at closeout prices.”
Grade: Pass

I don’t need to look further than the Acquisition of Sovello AG by Ventizz Capital Fund IV, L.P. and the Schüco acquisition of Sunfilm’s factory (“Schüco kauft Sunfilm-Werk”) to prove the take under trend, and the good folks at Sovello and Sunfilm were no doubt happy it happened.

Though it may seem unfair, I also predicted “a SunFab customer will fail in 2010.”
Grade: Pass

Besides Sunfilm, Signet Solar announced insolvency and stopped operations. Other SunFab customers wrote off their equipment in the financial sense though operations might continue.

State grants, manufacturing subsidies, and tax holidays were not enough to prevent SpectraWatt’s spectacular failure or to keep Evergreen Solar’s manufacturing in the United States.

What’s amazing is how few firms actually closed their doors in 2010. I wonder if solar investors and venture capitalists have heard of sunk costs? With increasing PV industry scale, supply, and price competition in 2011, I expect the number of failing PV start-ups and established manufacturers to accelerate. I predict Solyndra will manage to survive 2011.

PV IPOs (Initial Public Offerings)
The IPO market was abysmal in 2010 and for solar, even more so. My 2010 picks, SolarCity or SunRun, Inc., had no trouble lining up bank project financing and placed fourth and ninth respectively among the Top 10 Solar 1603 Treasury Grant Awards. But neither went IPO.
Grade: Fail

Rather than doubling down Las Vegas style, I’ll switch gears to product manufacturers and pick MiaSolé to IPO in 2011 (please see “MiaSolé Raising $100M and Preparing for 2011 Solar IPO”) and assume any legal issues will be resolved (“MiaSolé Fingered in Patent Suit”).

My 2010 “Out There” Prediction
I said: “The EMCORE Corporation (NASDAQ:EMKR) Board of Directors and Executive Management will be ousted when an activist shareholder gains majority control to effect regime change.”
Grade: Fail

EMCORE teetered on the brink of a NASDAQ delisting last year and just had the worst investor conference call (“Lone analyst on a call”) but has rallied 50% since then from $1.54 to $2.30 last Friday because of optical component sector strength. Enjoy the rally and don’t be the greater fool.