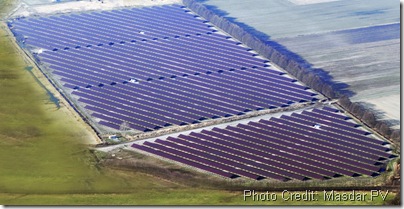 “Masdar PV and Beck Energy build large open-space solar park in Germany”, Luckenwalde, Germany, to be exact, captured my attention upon release. Not because it used some 65000 PV modules produced on Masdar PV’s SunFab line from Applied Materials, Inc. (NASDAQ:AMAT). I suspected the location was the same site proposed for the Nanosolar 10 MWp project discussed in Nanosolar: Photovoltaic Hindsight Insights?

Per the local newspaper, the Märkische Allgemeine, “Beck Energy errichtet ein Solarkraftwerk für 30 Millionen Euro” (Google English) by Elinor Wenke, the 6 MWp project cost a whopping €30 million or €5 per Watt. I wonder if the figure reflects the estimated cost for the original 10 MWp Nanosolar project? However, the Märkische Allgemeine (MAZ) has an excellent track record on getting the facts right.

Masdar PV was slow to respond to my questions at first and then referred me to Beck Energy for many of the answers. Masdar PV confirmed the Solar Park was located on the Rieselfelder and was owned by Beck Energy GmbH. Arranged facing south at an angle of 25 degrees, Masdar PV said “most” of the installed modules were 95 Watt 1.4 m² (square meter) a-Si thin-film modules but Masdar PV did not know the exact number of modules used in the project. I also asked Masdar PV if “the smaller sized modules were used to leverage existing BOS racking equipment?” Masdar PV said:

Since Masdar PV only delivered the modules we do not have insight into the complete system costs. We ask you to contact Beck Energy on this topic for further information.

I asked Beck Energy: “Is it true the installation cost 30 Million Euro?” After two weeks, the Beck Energy spokesperson replied with the stock we do not provide information “about questions concerning the financial side of our projects.” I wonder if the project investment has been rolled into the Solarfunds offered by Commerz Real AG?

Other questions I had for Beck Energy went unanswered:

Was there an urgency to complete the project in 2010 since it is built on arable farmland?
Exactly how many of the 1/4 sized Masdar PV modules were used in the project?

How many modules?
As an engineer, I am always amazed when a simple question cannot be answered. In this case, Beck Energy takes the blame as the project developer and installer. While the Masdar PV press release said 65000 modules were used, the earlier MAZ article cited 63000 modules from their interview with the project manager. 6 MWp divided by 95 Wp (Watt-peak) rated a-Si modules equals 63158 PV modules rounded up to a positive integer. So either fewer modules were used, the MWp capacity of the Rieselfelder project is higher, or lower rated, off datasheet Masdar PV modules were also installed.

Just eyeballing the Masdar PV Solar Park photo, my Google map representation below, and the old Beck Energy conceptual drawing, the 6 MWp project with 6.64% efficient a-Si PV modules appears to use a little over three fifths of the original 10 MWp project area.

I believe Beck Energy is conservative, so I’ll guess the solar park capacity may be higher than 6 MWp. I hope Beck Energy learns how to work with Bloggers as they expand internationally under the BELECTRIC brand.

I asked Nanosolar about the conversion of the Rieselfelder project to 6 MWp and Masdar PV:

The above project was completed on the Rieselfelder where Nanosolar had planned a 10 MW project with Beck Energy.
Was there a conscious decision to prioritize projects in other regions or markets?
I can understand not needing two reference projects in the same town.

Nanosolar did not even acknowledge my question.

“We have several more megawatt-size projects that will be shipping this year to our other strategic customers, in Germany, France, and the United States,” he continued. “2010 is very much focused on meeting commitments we’ve made to our strategic partners, including Beck, EDF Energies Nouvelles, and juwi solar, primarily in their home countries.”

Nanosolar’s next project is a 3 MW free field installation with EDF Energies Nouvelles at their Gabardan, France solar field, Stone tells me. The utility plant is planned to be installed and interconnected by Spring 2011.

Nanosolar has not announced any solar plants since the completion of the 1.1 MWp Luckenwalde landfill project I presaged in Nanosolar Summer Solar Speculations. In the Earth2Tech interview, Mr. Stone also said:

The first cell factory line is close to (annual) 50 MW, but there are some bottlenecks in it still, so it’s a bit under that.

Despite the annual capacity claim, I speculate Nanosolar may not have produced 3 MW (MegaWatt) of Utility Panels since completing the 1.1 MWp Luckenwalde project.

As an aside, a revised Nanosolar Utility Panel datasheet was released in January 2011. I compared the datasheet to the module rating label at the San José Green Vision Clean Energy Showcase. I calculate the 160 Watt modules have an efficiency of almost 8 percent (7.99%) based on the full area and are the lowest wattage modules Nanosolar offers. The module rating label specifies Tolerances +/- 10% in contrast to the more standard +/- 5% on the datasheet.

Nanosolar no longer surprises with conflicting data points. The low efficiency and wide power tolerance modules used at the Showcase may be symptomatic of Nanosolar’s CIGS process difficulties.

So Nanosolar, how about answering a few questions and supplying a few verifiable facts in order to put such speculation to rest? And by the way, if your solar cell yields are in fact low, how are you recycling the scrap?