How will Solyndra redesign their cylindrical photovoltaic (PV) module and solar panel to not require reflected light from the roof?

Solyndra, Inc. Executive Vice President, Operations and Engineering, Ben Bierman presented “The First 100MW” on February 16th, 2011, at PHOTON’s 3rd PV Thin Film Conference in San Francisco. I only caught the second half of his presentation. However, the subsequent panel discussion brought interesting comments regarding Solyndra.

In Germany, sometimes we have the problem that those flat roofs tend to become quite dirty over time. Do you have any idea at the moment or any estimation about how much this may affect the energy yield over time?

So Manfred is correct, there are a small number of installations where we have a roof that does not drain well or it’s in a microenvironment with a lot of soiling. This impacts Solyndra because of the reflection off the roof, certainly would impact all the flexible solutions we were talking about as well. If you apply a panel to the roof and the roof becomes soiled obviously that’s also going to compromise your performance.

We are addressing that in a couple of different ways.

One is educating our integrators in terms of what are the best roofs for Solyndra. Not every roof is great roof for our product.

The second thing is working on procedures for cleaning roofs. Frankly the O&M ends up being about the same as what you get for crystalline silicon for cleaning.

And then finally, there is some work going on to make a panel that does not rely on the reflected light from the roof.

Well, I chuckled aloud upon hearing that last statement.

Before tackling what a new Solyndra panel might look like, I must comment on the cleaning remark. While I can believe a cylindrical module may soil slower than a flat PV module, flat modules do not need to be cleaned on the backside or require the roof beneath them to be cleaned. Also, a flat or even a flexible module is easy though tedious to clean versus the 40 cylindrical modules of each Solyndra 200 Series Solar Panel. I don’t see how to clean the roof below assembled Solyndra panel arrays other than with a water hose or a special roof cleaning robot.

Flat panels or modules from Solyndra?
In his presentation, Mr. Bierman said:

We are kind of the Apple guys here showing people there is a different way of thinking about the business.

We are focused on the rooftop; we’re not really focused on ground mount systems.

We focused on a product that has a really strong return on investment for the investors that typically fund these systems as well as good economics for the owner of the rooftop. Our pricing strategy has never been focused on having the lowest panel price. It’s been focused on having systems that were competitive where the cost of our system, all in, installed on the rooftop with labor, inverter, wiring, and so on, mounting system would be competitive with crystalline silicon, and we continue to achieve that even as the cost of crystalline silicon falls.

We also focus on getting the most kilowatt-hours per year from the rooftop. 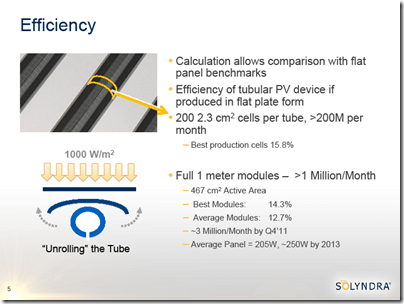 Comments like those do not foreshadow a plan to offer traditional flat solar panels although the Efficiency slide shown from the presentation does equate Solyndra module efficiency with flat plate by “Unrolling” the Tube. The best cylindrical modules are 14.3% efficient and the median efficiency of the last 1.7 million tubular modules was 12.7%. Solyndra plans to “Focus on tightening distribution, shift median towards highest bins” though the long tail of the distribution skews towards efficiencies as low as 10% in the Ongoing Efficiency Gains – 5% improvement since July’10 slide below. 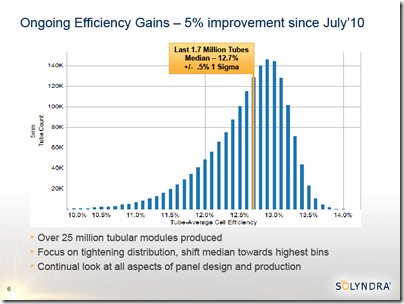 For the 210 Watt Solyndra 200 Series Solar Panel model SL-200-210, I calculate a panel efficiency of 8.45% based on the panel area and Standard Test Conditions (STC). In fact, I would like to see how Solyndra tests the panels though I understand the panel is flashed from above while standing on a reflective surface.

If Solyndra opts for an evolutionary redesign, my thoughts jumped to the cylindrical module. In the absence of clues or facts, these ideas are very speculative. And I have no idea if these are possible with Solyndra’s existing technology or production tools.

Traditional flat solar panels may be out, but what about thin flat modules instead of cylindrical ones? Flat modules benefit from the full, unrolled module efficiency and could use two plates of glass, an encapsulant, and edge seals instead of two tubes, the “silicone-based Optical Coupling Agent” (OCA), and hermetically sealed metal caps. On the downside for flat modules, flat glass strips stretching across the panel frame would need to be wider to have any strength, increase the wind load, and require the panel to have an angle adjustment to optimize energy yield for latitude. “Amcor Glass and Solyndra sign US$200 million long-term supply deal” by Syanne Olson at PV-Tech.org argues against glass tubing being eliminated by Solyndra any time soon.

What innovations are possible within the constraints of “The new shape of solar”? First, I wonder if it is possible for the cylindrical module deposition and scribing process to be done on a portion, say 180 or 270 degrees around the length of the tube. Since the scribing process is described as helical in “Emerging from stealth, Part II: Solyndra ramps CIGS PV lines to volume”, the answer may be no.

Second, a reflector on the outer tube closest to the roof could collect light passing through the module and reflect it back towards the solar cells. In the ideal case, the reflector would be aligned with the portion of the glass without CIGS solar cells as proposed above. Solyndra has a number of issued patents or patent applications detailing various supplemental reflector designs as far back as:

invented by one Dr. Chris Gronet, Solyndra’s Founder and Chairman of the Board, and issued on July 1, 2008. A more brazen reflector as shown below was published in a subsequent Solyndra patent application at the World Intellectual Property Organization (WIPO): 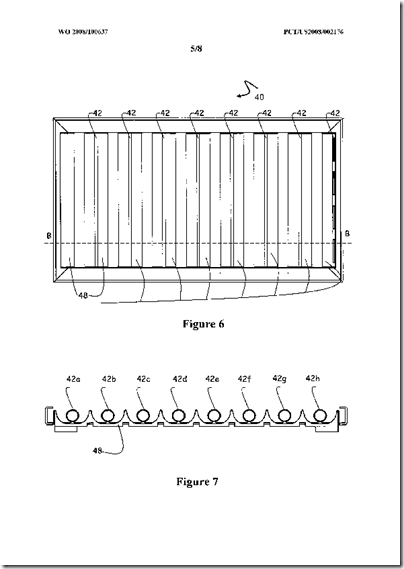 I did not understand the point of Solyndra President and CEO Brian Harrison’s reader letter regarding “Fremont’s high-flying Solyndra hits a rough patch” by Dana Hull for the San Jose Mercury News. Absent of any facts, the path to being “cash-flow positive this year” now appears to involve a $75 million loan, restructuring of existing debt, and a US Department of Energy loan modification per “Solyndra lands $75 million loan to restructure debts and expand efforts”.

What does one do if Solyndra solar panel modules are broken and the silicone-based Optical Coupling Agent oozes out? No fear, Solyndra supplies a handy OCA Clean-Up Kit! 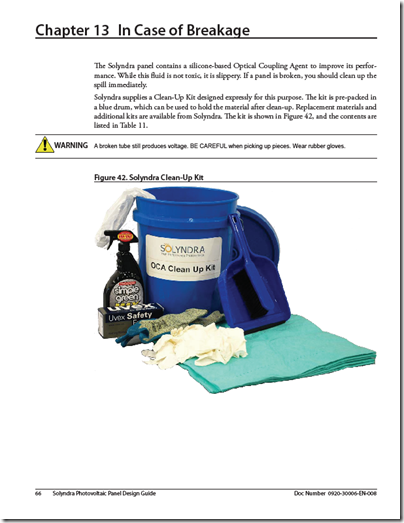