After landing at McCarran Airport in Las Vegas early last Sunday morning to attend CPV-7, I rented a car to drive 7.5 miles to the Treasure Island Hotel via a circuitous route to what I call The Mohave Triangle. Bypassing Jean, Nevada, I stopped at the Primm Golf Resort and Casino for breakfast and to ask for directions to BrightSource Energy’s Ivanpah Solar Electric Generating System (ISEGS) Project. One of the idle bartenders told me to exit I-15 South at Yates Road and bear right, right, and then left; it would be obvious by virtue of the paved roads. When I asked in a roundabout way what his opinion was of the project, he replied: “Yeah, I really like golfing at the Primm Valley Golf course.“

While reviewing my many Ivanpah Solar project photos from ground level, “Aerial Views of Construction Progress” showing the mirror field site preparations for Ivanpah 1 over at Basin & Range Watch had already trumped my survey. I first saw the photos in “Destruction of the Ivanpah Valley” on the Mojave Desert Blog. Please click on the above links to view the stunning aerial photos (Copyright 2011 Erin Whitfield) of the damage. The work on the mirror field and the Ivanpah 1 power block were not yet visible at ground level.

As shown in the lengthy Picasa slideshow below, I had no trouble finding the Ivanpah project entrance. Since there were no signs to the contrary, I kept driving west on Coloseum Road until I reached a white security hut on the right side before a dirt parking lot. I asked if it was OK to park and take some photos. After a bit of discussion, I learned Coloseum Road was a public access road dissecting the ISEGS, and I was free to drive further. Fantastic!

Stopping to take photos along the way, I drove to the paved end of Coloseum Road. On my return trip, the security guard from the gate intercepted me in a pickup truck. I was informed it was alright to drive the road and even stop, but I was not supposed to leave my vehicle since there were “dangerous” trenches along the road. I raised a brief protest, why could I not just remain in the road? The direction to remain in my vehicle was reiterated, and I acquiesced. I was quite pleased with the access I had to the site.

During the exchange, I learned my activities had allegedly been reported to BrightSource corporate by site workers resulting in the redirection by security. Also, the access road will be closed later in the month for paving; I presume by Las Vegas Paving Corp. Crown Fence Company was contracted to fence up the once open public lands. 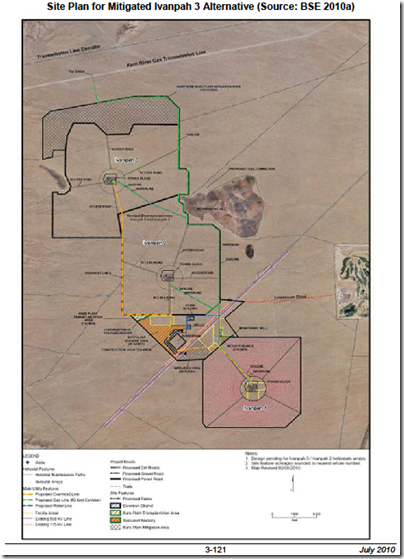 Natural gas for the ISEGS would be supplied from the Kern River Gas Transmission Company pipeline about 0.5 miles north of the Ivanpah 3 site.

Each power plant within the project includes a small natural gas-fired start-up boiler to provide additional heat for plant start-up and during temporary cloud cover.

Sections of the pipeline along the northern boundary of Ivanpah 3, and the eastern boundaries of the Ivanpah 3 and 2, will be located outside of the fenced heliostat area in order to allow access to the pipeline for maintenance.

Raw ground water would be drawn from one of two wells, located near the administration/warehouse building in the Construction Logistics Area (CLA), which would provide water to all three plants. Each well would have sufficient capacity to supply water for all three phases. Actual water use is not expected to exceed 100 acre feet per year for all three plants during commercial operations. Groundwater would go through a treatment system for use as boiler make-up water and to wash the heliostats. No wastewater would be generated by the system.

The project interconnection to the grid would not require additional downstream transmission facilities (other than the removal of an approximate 36-mile portion of the Eldorado – Ivanpah leg of the existing Eldorado-Baker-Cool Water–Dunn Siding-Mountain Pass 115 kV line and construction of a new 36-mile long, 220 kV double circuit line) that requires CEQA review.

The Applicant indicates that it would take about 42 months to complete the project with construction and engineering expected to cost approximately $450 million, for each of the three Ivanpah generating projects. Commercial operation would begin during the fourth quarter of 2012 or first quarter 2013 at Ivanpah 1, in 2013 for Ivanpah 2, and in 2014 at Ivanpah 3 if approved by the Energy Commission and the Bureau of Land Management. The Applicant proposes to begin project construction during the fall of 2010. (Applicant’s PMPD Comments, dated September 2, 2010.)

I sent a few questions to Hill & Knowlton, Inc., the BrightSource Energy public relations firm, but my questions were not even acknowledged. Maybe they were too busy helping to count the $200 million Series E round of funding just raised by BrightSource?

In my excitement, I forgot The Mojave Triangle is a high Direct Normal Irradiance (DNI) area and did not bring along a hat or sunscreen. Despite my genius, I only got a mild sunburn and skin peel later in the week. Please remember to Slip! Slop! Slap! Seek! Slide!

View The Mohave Triangle in a larger map