German Nuremberg (Nürnberg-Fürth) state prosecutor is investigating the Solar Millennium supervisory board regarding the Claassen affair.

According to The Local:

The newspaper said it had seen an internal investigative report which concluded that the supervisory board had been involved in criminal activity in connection with the millions of euros paid to Claassen for his work.

The high wage paid to Claassen alone, and what the report described as, “very generous repayment rules in the case of early departure” were borderline acceptable, the report said. But that border was clearly breached by a later additional agreement with Claassen.

This was a, “further high financial risk” for Solar Millennium when considering its modest turnover. The agreement was a, “serious stock company law breach,” the report said – and illegal as a potentially serious case of embezzlement, the paper said.

This report – held secret by the company – was commissioned last June, on the orders of Claassen’s successor as CEO, Thomas Mayer. It was a broadside against the supervisory board, which includes Hannes Kuhn, who founded Solar Millennium and still holds 15 percent of the company.

Shortly after the report was finished, Mayer also left the firm, the Süddeutsche Zeitung reported.

Now the state prosecutor of Nuremberg-Fürth is investigating three members of the supervisory board for embezzlement after a Solar Millennium shareholder made a complaint.

When I tweeted both articles last weekend here and here, I expected further reports from mainstream publications such as Reuters, Bloomberg, and Forbes. So far, I have not seen so much as a paragraph. I thought the reason was contemporary journalism is driven by press releases, but, per established company practice, Solar Millennium responded to the Süddeutsche Zeitung article on Friday, June 3, 2011, with “Solar Millennium AG: No indications of any legal misconduct” (Deutsch):

“We’ve put all our legal resources in motion and thus far have come to the conclusion that there were no irregularities,” explained Dr. Christoph Wolff, CEO of the company. “We have retained one of the best law firms in the world – Skadden, Arps, Slate, Meagher & Flom – to let speak the facts. We want an implicit clarification and the constant accusations must be put to rest. We are getting to the bottom of the matter. An intermediate result shows that there has been no indication thus far for any of the accusations.”

Claassen has been sued by Solar Millennium AG for full repayment of the €9 million signing bonus, and Claassen has counter sued for €7.1 million. The case is scheduled for a hearing this fall in a Nuremberg court.

For the sake of transparency, I suggest Solar Millennium releases the second Skadden final report along with the first Bissel law firm report critical of the company. 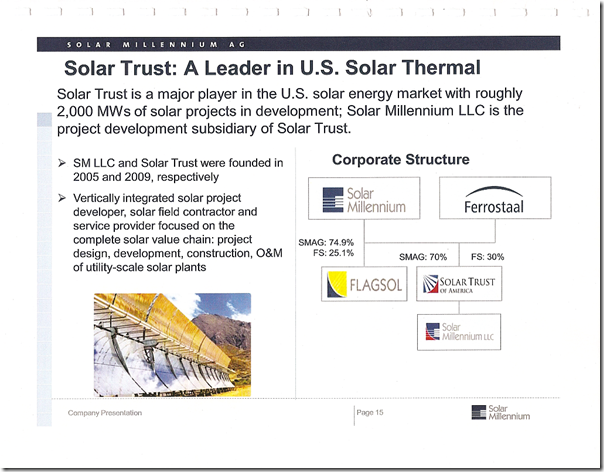 Lack of American interest in recent Solar Millennium developments is puzzling considering their 70% majority interest in Solar Trust of America. Ferrostaal AG holds the remaining 30% interest. Solar Trust of America, LLC, obtained a conditional commitment for a $2.1 billion loan guarantee from the US Department of Energy in April 2011 to construct two 242 MegaWatt (MW) Concentrating Solar Power (CSP) plants in the first phase of the 1000 MW Blythe Solar Power Project. The 484 MW first phase has an estimated project cost of $2.8 billion or about $5.79 per Watt including new transmission interconnection infrastructure. 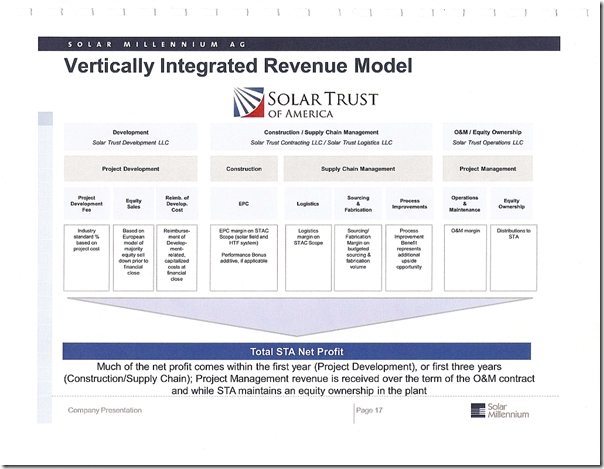 The Corporate Structure for Solar Trust of America is a complex Vertically Integrated Revenue Model puzzle as shown in the above slide revealing four additional Solar Trust limited liability companies. 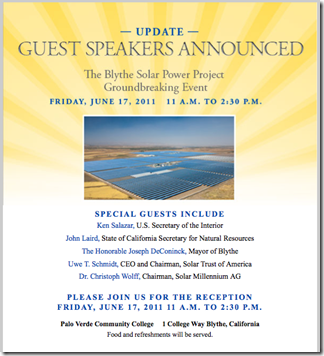 Solar Trust of America will hold a formal groundbreaking ceremony Friday, June 17, 2011, for the Blythe Solar Power Project in Blythe, California USA, with special guests including US Secretary of the Interior Ken Salazar. Early construction at the site already began last fall, presumably to qualify for a 1603 Treasury Grant.

Where is Millennium when you need them for an investigative journalism assignment?