Three weekends ago, as my California road trip left the Central Valley and passed north of the Antelope Valley, I could not resist a brief detour to revisit eSolar’s Sierra SunTower Project.

I expected to see the solar towers operating like mad pounded by the fierce desert summer sun. Instead, I was once again disappointed to find both solar towers offline just like my visits over two days in May 2010. I blogged about my observations then along with eSolar’s response in eSolar Sierra SunTower Project offline and eSolar Sierra SunTower Project offline – Clarified. Yes, I had my suspicions, and the recent Blog comment by John H. had an authentic air:

I live in the AV and drive by this plant on a regular basis. I would say it does not work. The central towers are dark most of the time, and when they are lit it appears that people are manually adjusting the mirrors.
When the say the plant was shut down for wind in the article … that explains it. It is windy almost every day here.
This large scale Green energy stuff seems silly. It is a basic space versus megawatts equation for me. The plant near Blythe, CA is roughly the size of the City of Berkeley.
Lastly, the amount of water needed to wash these mirrors off is disturbing. At least the plants in the AV are to be on private land. California is slated to loose lots of public lands to this inefficient means of energy production.

Asking eSolar questions about my visit via the Antenna Group, I said:

I had a chance to revisit the Sierra SunTower in Lancaster two weekends ago.
I was disappointed to find it not in operation. I have misc. reports the towers are rarely generating power.
Is there any reason for this?
My working theory is it costs more to operate than the SCE PPA generates.

After a multiday delay, eSolar said:

Some clarification on Sierra. The facility is run on an as-needed basis, and is operated less during non-peak solar resource periods. A portion of the site serves as a proving ground for eSolar’s next-gen technology. In eSolar’s operating model, and according to the terms of the PPA, the plant was not intended to be run daily.
The company is currently moving through the second development stage of its molten salt storage product and is using Sierra as a model.

On May 26th, the towers were running as normal. The site has not been offline for an extended period. There are a limited number of scheduled maintenance events to insure safe operations. The plant is scheduled to operate on a daily basis with limited exceptions for high winds or unforeseen events.

As shown in the inline photos, there were a few streaky clouds in the sky but no wind of merit on the fine August 2011 day with a noon temperature in the low 100’s of degrees Fahrenheit (°F) or over 38 degrees Celsius (°C). Like before, I asked Southern California Edison (SCE), an Edison International (NYSE:EIX) company, about Sierra SunTower electricity production:

Have they been producing power on a regular basis in 2011?
Can you say how much and whether the Sierra SunTower is generating at, above, or below SCE’s projected kiloWatt-hours for 2011?

In response, the SCE spokesperson said:

We still have a contract with eSolar, but for questions about their operations you need to ask them directly. We cannot answer due to confidentiality clauses in our contract.

I am more accustomed to utilities dictating such terms to independent power producers. Thus far, eSolar has not volunteered the Sierra SunTower MegaWatt-hour electricity production figures for their offtaker, SCE, in 2011. eSolar said: “This number is not public information.”

My impression is eSolar operates the Sierra SunTower like a peaker plant and at their sole discretion. In my opinion, let’s be clear on that, otherwise eSolar would lose money on each kiloWatt-hour produced on a marginal generation cost basis.

Molten Salt and the learning laboratory
When I met with eSolar, Inc. CEO & President John Van Scoter at Solar Power International 10 (SPI 10), I’ll stipulate discussing eSolar’s intention to use a $10.8 Million US Department of Energy (DOE) CSP Research and Development award with joint partner The Babcock & Wilcox Company (NYSE:BWC), spun out of McDermott International (NYSE:MDR), to evaluate and develop a prototype molten salt based transport, generation, and thermal storage system targeting an end of 2012 stretch demonstration goal. Per “Secretary Chu Announces up to $62 Million for Concentrating Solar Power Research and Development” from the DOE:

eSolar will design, build, and test a CSP power plant system with fundamentally new components. Instead of one central tower and receiver, the plant will employ multiple, modular towers. Using reflective mirrors, the sun’s radiation will heat a liquid salt within each receiver. A specialized molten salt transport system will then move the high-temperature fluid to a molten-salt steam generator that produces electricity. The system will also feature a thermal storage system. Eventually, this technology could deliver lower-cost solar energy at a utility scale.

eSolar planned to use the Sierra SunTower as a learning laboratory and proving ground for their refocused technology development roadmap in support of their licensing business model. One such program involved the near term deployment of a next generation heliostat.

In an update, eSolar said:

eSolar is moving through the development stages with its partners on a molten salt facility. Currently eSolar is in stage two, which involves delivering a detailed preliminary design by the first quarter 2012.

eSolar did not respond to my question: “For the molten storage, does this mean half or both towers are involved in the proving ground activity?”

eSolar was awarded a $19.5M grant in February 2010 for the 5 MW Sierra SunTower. The two Concentrating Solar Power towers have an extrapolated installed project cost of $65.1M or $13.03 per Watt!

At what point does running the facility “on an as-needed basis” and “the plant was not intended to be run daily” fall short of the specified energy property Terms and Conditions of the 1603 Treasury Grant program (TGP) administered by the US Department of the Treasury? eSolar is required to submit reports to the Treasury Department annually for five years after the property is placed into service including annual production in kiloWatt-hours. Perhaps a Freedom of Information Act (FOIA) request would be helpful to understand the electricity generation trend at the Sierra SunTower? 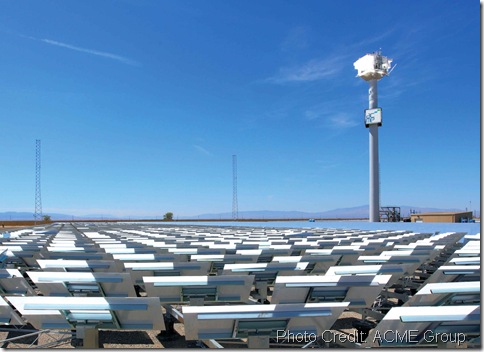 ACME CSP Plant and long term reliability
On the status of the Bikaner, Rajasthan, India project, the ACME Group told me: “2.5 MW out of 10 MW has been commissioned in April, 2011”, and this “will be scaled up to 10 MW” though the time frame was not specified. The photos above and below were provided by the ACME Group and further information is available at the ACME Solar Thermal webpage. 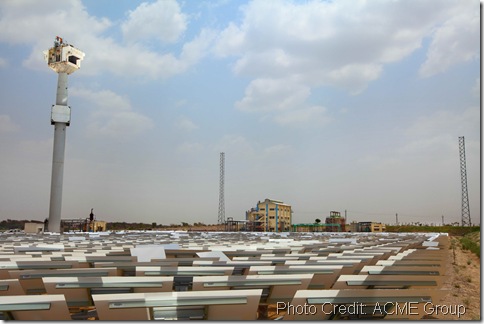 Without running at least one solar tower at the Sierra SunTower site on an ongoing basis in a real world multiyear life test, I don’t understand how eSolar has made any progress in proving the long term performance, reliability, operations & maintenance expenses (O&M), and bankability of their core CSP technology. eSolar may have left this task to their India licensee, the ACME Group. 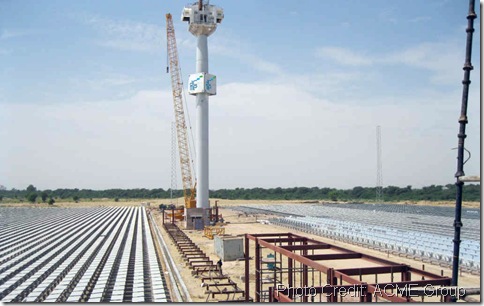 Penglai Electric
There has been a dearth of news about the first Penglai Electric 92 MW CSP project since the press release “eSolar Partners With Penglai on Landmark Solar Thermal Agreement For China”. At SPI 10, I learned Penglai Electric was in the process of getting permits. Last week, eSolar said:

Penglai is overseeing the entire project development process in China. The project is still in early stages, and Penglai is moving forward on obtaining the proper permits and financing. Any more specific questions on the projects need to be answered by Penglai.

I did not realize permitting took so long in China for a deal “signed in the Chinese State Council building with government officials in attendance”. Maybe the project is not bankable for the reasons cited above? I requested a formal Penglai contact from eSolar since the press release only lists a phone number with a Los Angeles area code including Pasadena and a Hotmail account. eSolar told me that “is the correct communications contact.”

GE Energy
I can only presume GE Energy, a business group of the General Electric Company (NYSE:GE), was able to see the Sierra SunTower in operation, conduct extensive technology due diligence, and review the available performance and reliability data before signing the blockbuster investment and licensing agreement and investing up to $40 Million in eSolar. I did try to ask GE Energy a number of questions about the eSolar Sierra SunTower and why they selected eSolar as their CSP technology partner for hybridization power plants. In an odd though coordinated response, GE Energy elected to abrogate their public relations role and deferred my questions to eSolar.

Phase three will involve building the demonstration plant, which will be a 10MW single tower with molten salt receiver. We are currently looking at a potential site in Spain – mainly because it has a favourable feed-in tariff and because there is so much experience there, regarding concentrated solar power technology.

Although eSolar failed to secure a DOE Loan Guarantee, eSolar has succeeded in waiting for Superman in the form of GE Energy. Does GE Energy’s investment in eSolar instead of an outright acquisition reflect lingering concerns about the performance, reliability, and continued development of eSolar’s flavor of CSP technology?

When I saw the trick heliostat photo below titled “A field of mirrors at eSolar’s Sierra SunTower power plant in Southern California forms the GE and eSolar logos”, I noticed the tower is not in operation and then my eyes were drawn to the left half of the heliostat field where numerous mirrors are misaligned.