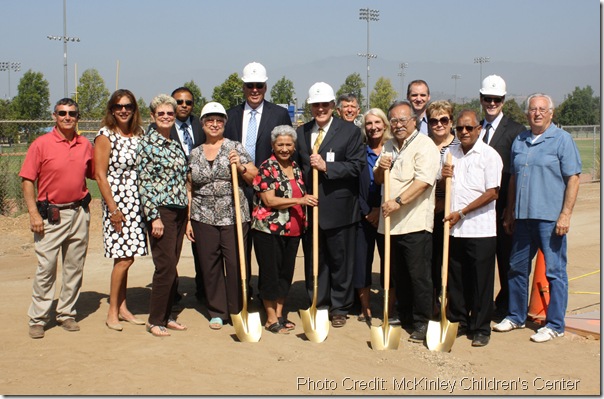 I first noticed the “McKinley Children’s Center preparing to launch extensive solar power installation in San Dimas” around August 20, 2011, before EU PVSEC. I tweeted my first reactions here and here.

On August 31, 2011, the McKinley Children’s Center held a groundbreaking ceremony for the 496 kW solar project consisting of thirty-one (31) GreenVolts, Inc. 16 kiloWatt CPV arrays installed by West Hills Construction, Inc. Slated for late October 2011 completion, the project will meet up to 75 percent of the power requirements of the 40 acre McKinley San Dimas campus serving over 1000 disadvantaged children each year through a host of programs.

Per “Children’s center in San Dimas going green with solar power project” by J.D. Velasco for the San Bernardino Sun, the “project is expected to cost about $2.5 million, with about $1.5 million being covered by state and federal grants and rebates” and will save the Center about $100000 per year in electricity expenses. The balance of the funding was contributed by the McKinley Home for Boys Foundation whose sole purpose is to support the McKinley Children’s Center.

I asked McKinley’s Chief of Administration Anil Vadaparty, Esq., a few questions about the selection of GreenVolts technology, and here are Mr. Vadaparty’s responses in a Question and Answer format.

Q: Why did the McKinley Children’s Center select the GreenVolts technology?

A: This type of photovoltaic technology is more efficient than the standard stationary panels. The Green Volts panels will sit on beams and will track the sun, thus optimizing the amount of energy that is generated. In addition, since the panels are off the ground, there is plenty of clearance underneath the panels, thus allowing for dual use of the land.

Q: Is this a donation, purchase, or a PPA (Power Purchase Agreement) business type transaction?

A: This is a purchase. The McKinley Home For Boys Foundation, the owner of the land that the Children’s Center sits on, is funding this project.

A: After conducting our own research, meeting with the company and taking recommendations from our general contractor, we felt comfortable in selecting them for this project.

Q: Are you at liberty to share any of the financial details of the transaction?

Q: About how long will the construction take, and how much land on the 40 acre campus is required?

I also spoke at length with West Hills Construction Vice President Rusty Wood about the project and the technology choice. Mr. Wood echoed the comments of Mr. Vadaparty on McKinley’s goals for the project. The existing buildings were considered unsuitable for rooftop solar I imagine because of structural concerns. The center wanted to generate as much electricity as possible from a small and limited land footprint with dual land use valuable. In fact, the project revealed the property lines were tighter than realized. I understand a storage area was preserved since GreenVolts was able to adapt the arrays by extending the vertical height of their over engineered metal columns.

Besides the McKinley Center’s desire to be innovative and free themselves from the Southern California Edison (SCE) grid, a neighboring homeowners association and the San Dimas High School expressed concerns about the aesthetics, property value impacts, and safety of the McKinley Center’s backyard solar installation in a display of NIYBY, Not In Your BackYard, during the permitting process. Trees will be planted to conceal the arrays from neighboring views and fencing added to increase safety.

Mr. Wood said nine solar options were developed and presented with the associated benefits and risks to the McKinley Center, the Board of Directors, and the Foundation before the GreenVolts technology was chosen. The McKinley team became comfortable with the ongoing commitment of Oak Investment Partners to continue funding GreenVolts. I was less sanguine to hear the looming expiration of the CSI reservation, technology availability, and logistic timing played a role in the decision. To their credit, West Hills Construction has an IP (Intellectual Property) escrow in place with GreenVolts and is confident they can maintain the tracking systems even if GreenVolts should go out of business.

As a start-up, GreenVolts has the prerogative to not answer questions. However, in this case, the lack of a response borders on the Machiavellian. To my request for a dialog, GreenVolts said:

Thank you for your inquiry. At this time, we are not speaking with media, but appreciate your interest in GreenVolts. When we do re-engage with media, we will let you know.

I tried an alternate channel to no avail.

Editorial Opinion
First, I applaud the efforts of the McKinley Children’s Center to go solar, control their electricity and energy costs, and set a great environmental example for the children and the community. My critique focuses on the company-technology choice and the financial arrangement for the non-profit.

As Eric Wesoff at Greentech Media has observed, GreenVolts is “a second-tier concentrating photovoltaic (CPV) supplier” that radically redesigned their technology just over two years ago. My concern is the GreenVolts technology is very new, and they have done limited testing and installations to date. In two site surveys, I have observed tracking problems with the GreenVolts arrays at GV1’ (prime) and the ­Fremont Test Site. GreenVolts has not shared any performance data with industry peers to my knowledge, and only now are three (3) published patent applications visible, two at the United States Patent and Trademark Office (USPTO) and one at the World Intellectual Property Organization (WIPO). References are provided at the end of the post.

As far as I know, GreenVolts CPV modules and systems are not yet bankable or readily financed. There is a high probability GreenVolts will not survive past the next week, month, or beyond 2012 for that matter. I’ve observed a high burn rate for GreenVolts at their headquarters and expanding the executive management team as if in preparation for an IPO (Initial Public Offering) to an unreceptive stock market only exacerbates the cash drain.

Considering the technology choice, the McKinley Center could have mitigated the risk via a PPA (Power Purchase Agreement) much as utilities have done including PG&E Corporation (NYSE:PCG) on the GreenVolts GV1’ project. The PPA limits liability to the power generated. In the worst case scenario, the return of the GreenVolts GV1: Demolition Man would not result in a loss of invested capital for the McKinley Center under a PPA arrangement though annual electricity bill savings might have been smaller.

From a financial perspective, a PPA deal leveraging the Treasury Grant Program and 100% bonus depreciation in 2011 would have freed McKinley Center funds for investment in their core programs.

At $2.5 Million, the 496 kW GreenVolts system has an installed cost of about $5.04 per Watt and is on the order of a $1.00 per Watt higher than mainstream silicon solar module alternatives. Per West Hills Construction, the installed cost includes extensive landscaping and dead Eucalyptus tree removal among the site preparations. GreenVolts is said to have provided volume pricing for the system purchase, and West Hills Construction claims the installation is being performed on a close to cost to cost minus basis.

In my opinion, I would have recommended the McKinley Center stick with proven technologies and begun by filling their rooftops with monocrystalline silicon photovoltaic (PV) modules for the highest energy yield and using less esoteric power electronics to minimize shade from rooftop obstructions visible on the campus satellite map. Any building upgrades required for rooftop solar would have been excellent long term investments by the Foundation.

If further power generation was required to meet the McKinley Center’s goals, mainstream silicon solar modules mounted on single or dual axis trackers would have increased energy yields and enabled dual land use. Solar carports would have been another option with multiple benefits though perhaps more expensive. Silicon based solar panels have proven 25 year durability and the leading bankable suppliers are more likely to survive or merge and honor product warranties. In any event, substitute products will be available if needed in the future.

Contrast the above comments to a more natural customer for GreenVolts CPV where research, learning, and career training supplement the core value proposition of renewable electricity generation at the Arizona Western College Solar Array project in Yuma, Arizona USA. The GreenVolts CPV system gets the starring role in the “AWC Solar Array Presidential Invite” video shown below.

Will President Obama elect to attend the symbolic flip the switch ceremony for the 5 MegaWatts of CPV and PV capacity installed at the Arizona Western College?