“Nanosolar’s progress – or lack thereof – revealed at 4th Thin Film Summit USA” by Matthew Feinstein at Lux Populi, the Lux Research analyst blog, was released around the same time as my enXco’s Nanosolar Photovoltaic Projects in Oregon post. When I first saw Mr. Feinstein’s blog hidden behind the Lux Research clientportal paywall in early December, PV Insider was kind enough to share a distribution copy of the Nanosolar presentation at the 4th Annual Thin Film Summit USA upon my request. 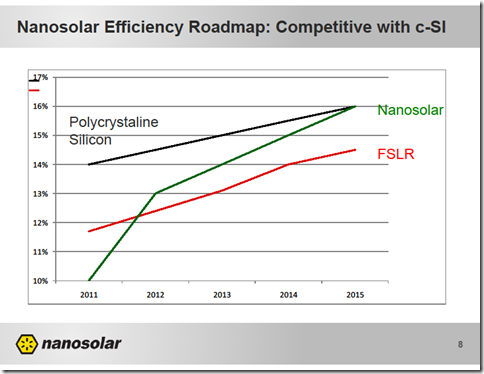 So from an efficiency standpoint, we will likely never be the efficiency leader, but our goal is to be efficiency competitive and to really focus on cost.

The 13% efficiency figure in the Nanosolar roadmap is the goal by yearend 2012 and not the average production efficiency for the entire year. Also, the module efficiency numbers shown for First Solar, Inc. (NASDAQ:FSLR) are low compared with those presented less than two weeks later in First Solar’s 2012 Guidance Conference Call. First Solar expects their average module efficiency will increase from 12.4% in 1Q12 (first quarter of 2012) to 12.7% in 4Q12 with the best plant producing at 12.9% per the inset slide. 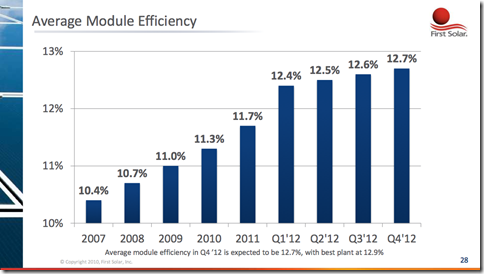 There is precedence supporting Nanosolar’s efficiency goals for 2012. CIGS (Copper Indium Gallium diSelenide) thin film PV competitor MiaSolé increased production module efficiency to 13% in 2011, an improvement of over thirty (30) percent. Mr. Stone said the National Renewable Energy Laboratory (NREL) had certified 13.9% efficient production solar cells on the current 115 MegaWatt-peak (MWp) line, and Nanosolar had built panels with higher than 12.2% efficiency but that panel was certified with NREL about a year ago. Nanosolar did not say anything about light soaking.

Cost versus Production Volume
Nanosolar said the 115 MWp capacity solar cell line now installed in San Jose, California USA, will allow production to ramp from 1 to 2 MW per month to 8 to 10 MW per month in early 2012. In addition, the San Jose facility has enough space to expand to 250 MWp capacity adjusted for efficiency improvements. The Nanosolar panel factory in Luckenwalde, Germany, has matched 115 MWp capacity and also has plenty of room to grow. 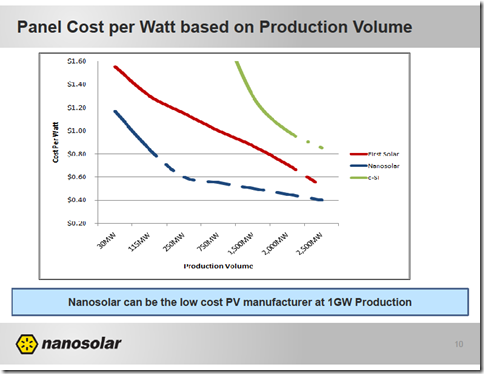 In the “non-traditional cost slide” titled Panel Cost per Watt based on Production Volume, Mr. Stone asserted Nanosolar could achieve lower costs per Watt at smaller production capacity and volumes than multicrystalline silicon (mc-Si) competitors and later even First Solar.

Albeit at lower efficiency, Nanosolar believes their yearend 2012 $/W production costs will be lower than multicrystalline silicon and other thin film manufacturers except for First Solar. Of course, the lower efficiency caveat has a huge impact on the market pricing of the Nanosolar Utility Panels. 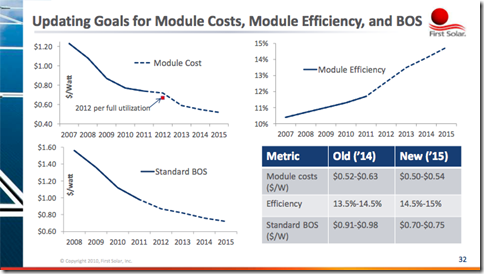 Nanosolar estimated First Solar’s average module production costs at about $0.74/W in 2011, the mid $0.60’s/W in 2012, and $0.60/W in 2013. These figures align with the Updating Goals for Module Cost, Module Efficiency, and BOS slide from First Solar although the impact of plant underutilization may increase these costs in 2012 as shown above.

Nanosolar said variable material costs are $0.60 to $0.65 per Watt-peak today and can get to $0.30 to $0.35 per Watt-peak. In justifying the low material costs, Mr. Stone said Nanosolar does not waste a lot of material since out of spec solar cells can be scrapped well before they are assembled into panels. Of course, some of us have been wondering about Nanosolar cell yields since the last time they entered production, and nothing has ever been said about how scrap is recycled. Nanosolar achieved a perfect OVERALL SCORE: 0 in SVTC’s 2011 Solar Scorecard for non-response to the survey.

Producing solar cells in San Jose, shipping them to Germany for panel assembly, and then returning round trip to the United States for installations does not help lower Nanosolar’s carbon footprint.

Nanosolar told PV-Tech the temperature coefficient was -0.45% per degree Kelvin last April “and we’ve got a path to negative 0.4 as we start shipping 12% panels in the first quarter of 2012.”

We see our temperature coefficient coming down over the next several years into the 0.35 area. [Ed. Note: -0.35% per degree Kelvin]
The performance ratio right now is around 0.8 (80%) and we see it coming up to about 82 or 83%.
Now, not as good as the amorphous silicon guys and First Solar but we believe competitive with and starting to meet and beat the crystalline guys at a much lower cost. 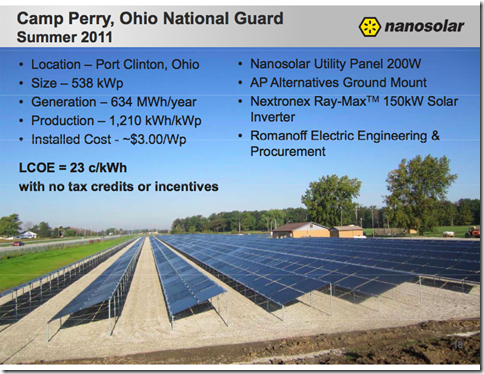 The revisionist project installed cost does not include $0.50/Wp for special ground preparations required by the military and environmental factors. 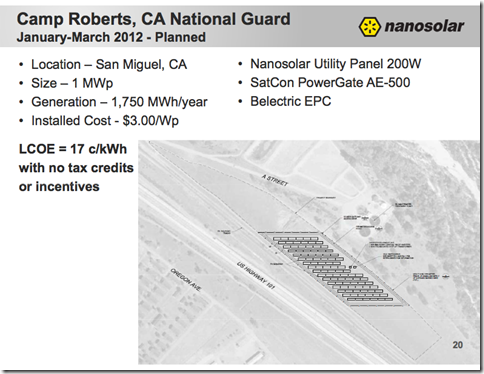 For the 1 MWp solar project that should now be under construction at the Camp Roberts California National Guard Base in San Miguel, California USA, Nanosolar presented the following project details:

The production and LCOE improvements are driven by higher California irradiance versus Ohio. The Camp Roberts contract was signed about a year ago, and it appears 200 Watt or 9.99% efficiency Nanosolar Utility Panels will again be used. 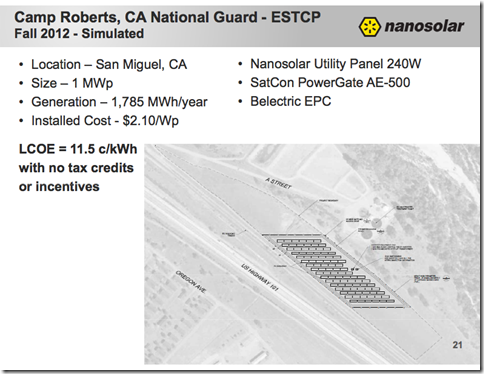 If the Camp Roberts project were built in the second half of 2012 using 240 Watt or 12.0% efficiency Nanosolar Utility Panels, Nanosolar claimed the project economics would improve as follows with new panel and BOS pricing:

In general, it’s clear that Nanosolar could very well be a victim of the solar shakeout in 2012 without additional investment. The company is simply not keeping up with the leaders in the CIGS market, like Stion and Solibro – both of which are above 13% production efficiency – and capacity leader Solar Frontier. That competitive landscape, in addition to bolstered competition from x-Si and CdTe, place Nanosolar squarely on the outside looking in.

As noted earlier, MiaSolé is also ahead of Nanosolar on the module efficiency metric.

In “The solar shakeout, and what to expect in 2012”, Mr. Feinstein has selected Nanosolar as one of the “high-profile start-ups” that could be claimed by the solar shakeout in 2012. Unlike Mr. Feinstein, I do not believe Nanosolar has a play in the commercial rooftop segment until they get to higher efficiencies. The over optimized Utility Panel will also need to be redesigned to address commercial applications including the addition of a junction box to facilitate integration of distributed power electronics. Also, I have observed Nanosolar Utility Panels in the field and find them to be an aesthetically neutral though uneven grayish color and not the darker shades shown in the datasheet or official project photos.

Nanosolar has already telegraphed the need to raise additional venture capital for expansion, and I think working capital as Nanosolar’s market uncompetitive panels are ramped this year. In “12 Predictions for ‘12”, @cleantechvc Rob Day said:

Other next-gen manufacturers like MiaSolé (one of ours, by the way), Nanosolar, Stion and others are already actively in partnership talks with large corporate players and would make natural acquisition targets.

So Nanosolar might have acquisition aspirations in the near term.

The signs thus far are not encouraging for Nanosolar. Nanosolar Utility Panels with 11% efficiency have not yet been observed at an installation and the next 1MWp Camp Roberts installation is supposed to use 9.99% efficiency panels. Nanosolar has also never addressed the wide +/- 10% rated power tolerance of shipping Utility Panels versus the +/- 5% tolerance specified in the datasheet indicating a loose solar cell process control limit.

There is a nasty thread over at Quora titled “Is Nanosolar the next Solyndra?” though the analogy is misleading since Nanosolar has not received a US Department of Energy loan guarantee.

I wonder if Nanosolar CEO Geoff Tate has ever hollered down the solar cell line in San Jose: “Scotty, I need 13% panel efficiency this year or we’re all dead!”

(Full disclosure: I =still= own some shares of FSLR stock.)