Project performance details emerge.
SolFocus has outperformed GreenVolts since before the “Flip the Switch” ceremony. 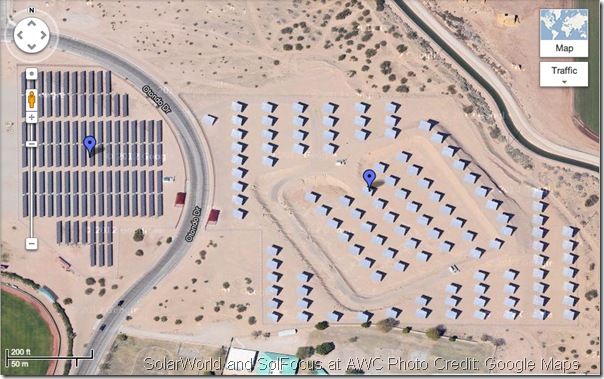 The Arizona Western College 5 MW Solar Array is a unique combination of five (5) solar photovoltaic (PV) technologies all deployed at 1 MW equivalent scale at the “sunniest place on earth” on the main Yuma campus. The 23 acre (9.3 hectare) solar array offsets almost 100% of the AWC campus daytime electricity requirements. The PV technologies installed at AWC include:

In a multiyear negotiation process, project developer PPA Partners and the AWC expanded the scope of the project and sought to levelize the playing field in order to make the performance of each PV technology as comparable as possible. Since the GreenVolts and SolFocus CPV systems have inherent dual-axis tracking, the flat plate PV modules from Sharp, SolarWorld, and Suntech have been installed on single-axis trackers from SunEdison, an MEMC Electronic Materials, Inc. (NYSE:WFR) company, for the above reason.

Likewise, all of the systems use a pair of the same SatCon Technology Corporation (NASDAQ:SATC) 500 kiloWatt (kW) SDMS0500UL320XN inverters other than the GreenVolts system which integrates the inverters claiming “The Only Complete, Fully-Integrated Solar System”. In addition, the flat plate systems also incorporate SatCon’s Solstice technology for string level Maximum Power Point Tracking (MPPT) to optimize DC (Direct Current) power output from each string independently. As far as I know, the GreenVolts and SolFocus CPV systems are power optimized at the tracker or module array level.

The above information is derived from the AWC Solar Cameras webpage, miscellaneous sources, and my AWC site survey on Veterans Day, November 11, 2011, right after the Abengoa Solar Solana Project progress survey in Gila Bend, Arizona USA, but before the “Flip the Switch” ceremony. The Picasa slideshow of my AWC 5 MW Solar Array site survey is shown below.

The SolFocus 1 MegaWatt (CPV) installation outperformed the 1 MW equivalent GreenVolts CPV installation by almost twenty-five (25) percent over the month period! I also saw the historical performance data for the five (5) PV technologies at AWC from October 2011 through June 2012, and SolFocus outperformed GreenVolts by about the same margin from mid October 2011 to date!

When I asked PPA Partners about the technical details of the AWC project and the performance data, I received one begrudging phone call in return. PPA Partners cautioned me about the performance data to date and told me the SatCon inverters had experienced issues that were not resolved until around April 2012. I believe this explains why the data for Sharp, SolarWorld, and Suntech is difficult to rationalize, and my wild guess is the SatCon Solstice technology is the common denominator.

However, since GreenVolts used their own integrated inverters, I don’t see how SatCon issues impacted the underperformance of the “The Only Complete, Fully-Integrated Solar System”. The SatCon inverters did not seem to hinder SolFocus in any way.

The Big Picture
Of course, the Arizona Western College Solar Array is more than just about generating campus electricity and saving money. AWC has plans for solar and renewable energy curriculum, information kiosks at each PV technology installation, limited online monitoring data, and research and development test and incubation sites for new solar or renewable energy technologies along with an Alternative Energy Technology Center.

Limited Transparency
For an award winning solar project, both project developer, PPA Partners, and project financier, Main Street Power, were not interested in answering questions about the technical details, the relative cost (GreenVolts versus SolFocus) or the overall cost of the AWC project. In particular, Main Street Power did not comment out of apparent fear anything they said would be skewed.

In the Solar Technology Panel, Dec 6, 2011, Webcast after the AWC “Flip the Switch” ceremony, Main Street Power Senior Vice President, Business Development, Jonathan W. Postal (J.W.) said they will payback the roughly $30 million to Morgan Stanley who fronted the money via the PPA (Power Purchase Agreement) with the AWC and the PBI (Performance Based Incentive) from Arizona Public Service Company (APS), a wholly owned subsidiary of Pinnacle West Capital Corporation (NYSE:PNW), over the next 20 years. I think this is just part of the whole project financing story.