Energization of the 21 MW (MegaWatt) phase I is on track for early September 2012. 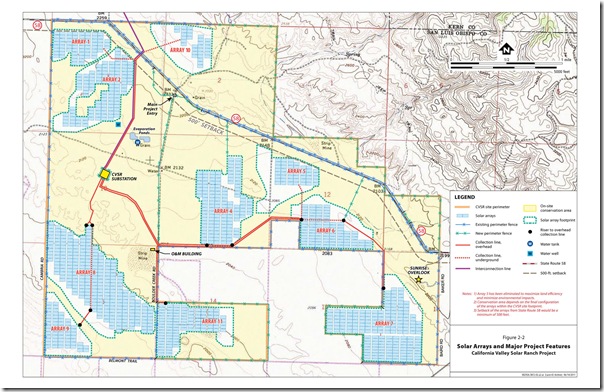 Located northeast of the California Valley, CVSR was the primary focus of my site survey from Highway 58 or the Carissa Highway. From the above final CVSR site plan, ten solar (10) arrays are planned numbered Array 1 through Array 11 though dropping Array 3 to mitigate the project’s impact on a range of species and preserve a wildlife corridor through the project. 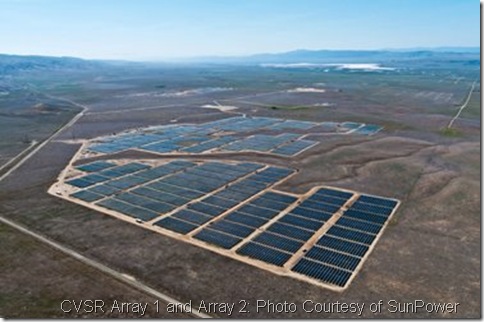 Reviewing the CVSR site plan, SunPower’s CVSR Aerial Photos, and my own ground level photos, I confirmed Array 1 and Array 2 appear complete along with the project substation. A portion of Array 4 had PV modules installed and Array 5 had made good progress with T0 Tracker post driving.

Well, thirty (30) percent of 250 MW is 75 MW. While I concede the difficulty in accessing such a large project at ground level with rolling terrain and a hazy horizon, it was not clear to me almost a third of the PV modules had been installed. However, reinforcing my fog of project, the CVSR April / May 2012 Newsletter said: “Array 8 – Grading of fire roads, pier installation, and mechanical assembly has begun”, and the Array 8 progress was difficult to observe from the Highway 58 vantage point.

DOE/EA–1840 FINAL ENVIRONMENTAL ASSESSMENT Volume I for Department of Energy Loan Guarantee to High Plains II, LLC for the California Valley Solar Ranch Project includes many more project details than the CVSR Final Environmental Impact Report from San Luis Obispo County. The CVSR Estimated Maximum Array Footprints shown in Table 2-2 can be used to estimate the size of each array by allocating the 250 MWac (MegaWatt Alternating Current) system capacity evenly across the area under the solar trackers. Using this approximation method, Array 1 and Array 2 combined equal about 45.5 MW, and, when completed, Array 3 would add another 31.2 MW for a cumulative total of some 76.7 MW.

The Current Status Sheet – CVSR/SunPower maintained by the San Luis Obispo (SLO) County Project Manager monitors the CVSR project status and reports the Processing Status as of August 2012 is “Phase 1 Energizing” with the comment “Completing Phase 1 Energization will result in about 21 MW of electricity being sold to PG&E”. In response to my questions about the exact status, the County Project Manager said: “The 21 MW phase I energization will include all of Array 1 and a portion of Array 2.  The energization ‘testing’ phase is currently underway with commercial sale expected early next month.” In contrast, SunPower told me the first 25 MW would be energized next month. 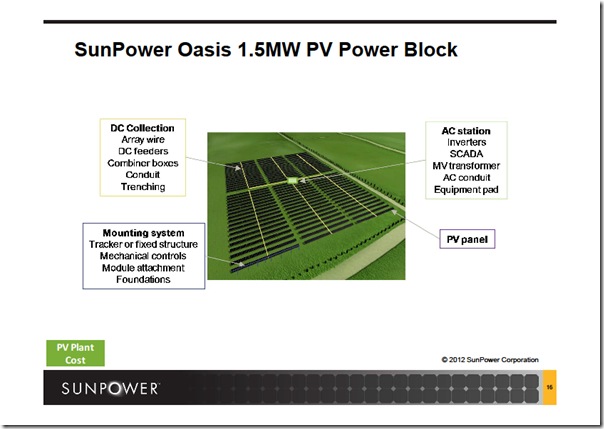 The SunPower presentation, “INTRODUCING THE PV – LCOE FRAMEWORK”, from June 6, 2012, illustrates the standard 1.5 MW Oasis Power Block that appears to be used at CVSR. Each power block consists of six (6) T0 Tracker Blocks with “Up to 250 kWp” (kiloWatt-peak) installed. In the SunPower Oasis 1.5MW PV Power Block conceptual drawing slide above, each tracker block has eighteen (18) rows with forty (40) modules per row for a total of 720 modules implying there are 4320 modules per Power Block. The drawing may not be accurate, and it is unclear if the modules are SunPower 96-cell or 72-cell Solar Panels.

In the YouTube video, “SunPower Oasis Advantages Explained By Matt Campbell, Director of Utility Products & Market”, Mr. Campbell talks about a variety of 1.5 MW Power Block shapes, referred to as Tetris blocks, SunPower has developed to match the terrain of an installation site. Given that the above module numbers and power rating overshoot the 1.5 MW Power Block specification (4320*425 Watt = 1.84 MWdc, MegaWatt Direct Current) even considering inverter losses, there must also be flexibility in the number of T0 Tracker rows or row length to accommodate modules with different Watt-peak power ratings? 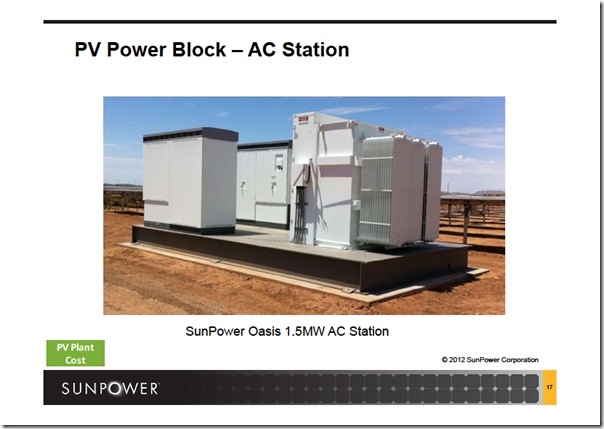 The dual inverters plus medium voltage transformer combination seen at CVSR is the same as the SunPower Oasis 1.5 MW AC Station in the LCOE presentation except for the color scheme. I believe the color scheme was selected to mitigate the visual impact of the inverters on the Carrizo Plain horizon when using the low profile T0 Trackers. According to speculation, the CVSR inverters and perhaps AC Station are sourced from SatCon Technology Corporation (NASDAQ:SATC). Accounting for approximately 12.8% of annual revenue, SunPower was listed as a significant customer by SatCon in the 2011 Form 10K filing with the U.S. Securities and Exchange Commission (SEC). Per the “SatCon Technology’s CEO Discusses Q2 2012 Results – Earnings Call Transcript” at Seeking Alpha, SatCon’s 2012 orders and backlog cannot be matched up to CVSR with complete certainty thus far.

However, SatCon’s financial bankability is a serious concern because of ongoing operating losses and a weak balance sheet resulting in the bearish “Solar Inverter Shakeout” prognosis. I expect SunPower has qualified multiple vendors for the Oasis 1.5 MW AC Station.

With all the recent CIGS PV company news, I think it’s high time to close out the PV Poll. Please let me know if you have a suggestion for the next one.