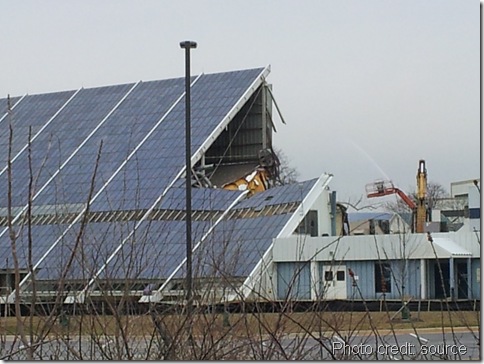 On Monday, an eyewitness source observed and photographed the demolition of the main structure including a portion of the sloped roof/wall integrated photovoltaic (PV) solar array as shown above. I’ve heard the PV modules were rechecked in recent years and found to be performing within specifications. The same source told me the size of the two arrays was on the order of 150 kiloWatt. I’ve been trying to find an online reference explaining the size and age of the two main systems without luck. I guesstimate over 3000 PV modules from the photos and the Google Maps satellite image.

With regards to the PV arrays, there really were only two options: reuse or recycle. I don’t know the details of module ownership; my assumption is the modules were wholly owned by BP Solar. In any event, BP Solar and BP plc had the expert PV industry knowledge and responsibility to dismantle the PV array and dispose of the modules as appropriate before vacating the property. Otherwise, BP should have explained the options to the property owners in the case of building demolition. 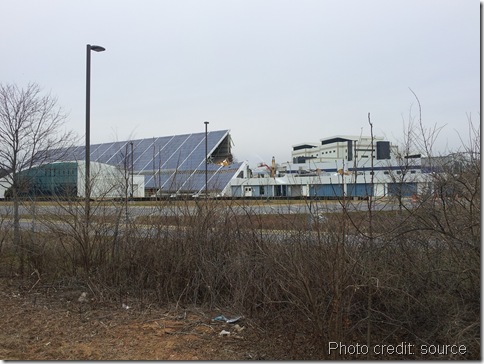 Looking at the Maryland eCycling homepage and the final enrolled version of House Bill 879 Statewide Electronics Recycling Program, I cannot find a reference to solar panels or PV modules classifying them as e-waste. I am trying to contact Turning Point Real Estate who is redeveloping the renamed Vantage 70 site “owned by an affiliate of Bristol Capital Corp., a Bethesda-based commercial real estate firm” according to the Frederick News-Post. I wonder if the demolished PV modules are destined for a landfill? Turning Point Real Estate may have been unaware of the best practice reuse or recycle options for the solar panels.

The latest BP Solar spill incident points out the urgency for the Solar Energy Industries Association (SEIA) to accelerate efforts to establish a PV module take-back and recycling system in the United States. While very few PV systems are being dismantled today, there are still broken and defective modules from installations and the handful of US PV cell and module manufacturers in operation.

My Auctioning the BP Solar Future post was critiqued by some as premature at the time. However, it only took a few iterations in 2011 until BP Solar announced their exit from the PV industry at yearend.