NRG Solar expects to complete the 66 MegaWatt (MW) Alpine Solar project by the end of this month.

Heading east on State Route 138 towards the First Solar, Inc. (NASDAQ:FSLR) AVSR1 (Antelope Valley Solar Ranch One) 230 MegaWatt (AC) project on New Years Day, I noticed a rather large solar array to the northeast. At the time, I thought it was the western most portion of AVSR1, so I doubled back and took a few photos.

Continuing east, I was greeted by signs for the NRG Alpine Solar Project delivery entrance at 210th St. West. Flanked by the Neenach Substation, I thought this was the project entrance and did not investigate further. I should have turned here onto the public road and proceeded towards West Avenue C where the project is located.

NRG Solar, a subsidiary of NRG Energy, Inc. (NYSE:NRG), had partnered with eSolar on the original Alpine SunTower project, but decided to switch to PV (photovoltaic) solar over project timing and bankability concerns. NRG then partnered with First Solar to build, operate, and maintain the 66 MW (AC) Alpine Solar project. Electricity generated by the project will be sold to PG&E Corporation (NYSE:PCG) under a 20 year PPA (Power Purchase Agreement) to meet California Renewables Portfolio Standard (RPS) goals.

In response to my inquiry, an NRG spokesperson said: “We expect to complete Alpine by the end of this month.” Alpine Solar was supposed to be completed by 3Q12 (third quarter of 2012) until a First Solar dispute with Los Angeles County over module and connector certifications delayed installation.

The Alpine Solar project covers the land area bounded by Ave B, 210th St. West, Ave C, and 220th St West after the addition of a 35 acre (14.2 hectares) parcel. While the eastern land area is undeveloped, NRG is in discussions with offtakers for a 26 MW Phase 2 PV project on the site. The Los Angeles County Department of Regional Planning case documents for the Alpine Solar Project Conditional Use Permit are here. 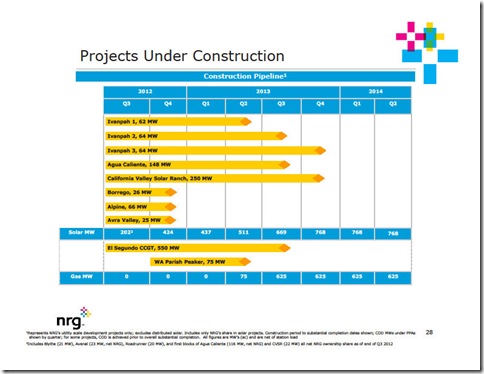 My heart goes out to the family and friends of Gary D. Conley who was found dead last weekend. I met Mr. Conley, the co-founder and first CEO of SolFocus, in the early days of this blog.