Significant photovoltaic (PV) conferences and events in 2013.
Attrition has hit a number of PV conferences as a result of the solar shakeout.

In chronological order, here are the PV conferences I am interested in following or covering in 2013. As in past years, my focus remains technical conferences and business to business tradeshows, not regional marketing or sales events. I am considering a few alternative or should I say renewable events but have not made up my mind yet. A storage event is in order, and I noticed Germany is hosting two events within a month: Energy Storage 2013 – International Summit for the Storage of Renewable Energies and the 6th Energy Storage World Forum. I would like to return to SNEC this year to monitor the progression of the solar shakeout, but budget and enthusiasm are lacking. With EU PVSEC returning to Paris in late September, a week of vacation in provincial France before or after the conference beckons.

Under restructuring, PHOTON has told me they will not hold any conferences in 2013 but hope to present a conference series in 2014. Sadly, that means there will not be a Solar Silicon Conference this year.

There is no location alignment by city in this year’s roundup. 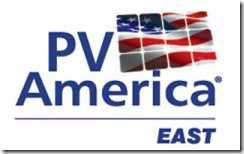 PV America East returns to Visit Philly during the winter though the conditions should not rival Valley Forge. Early on the solar calendar, PV America East expects 4000 attendees, about 100 exhibitors, and almost 30 conference sessions capped by a Public Day on Thursday. Once again, I don’t expect to be able to attend this PV event in my native Philadelphia.

The 4th Concentrated Photovoltaics Conference & Expo organized by PV Insider “will tackle the financial, project and technical challenges in the race towards commercialising CPV.” With CPV-9 in Japan, CPV International 2013 offers a more affordable option for European and MENA (Middle East and North Africa) participants in the CPV ecosystem.

CPV-9 rotates through Japan to bring “in-depth technical discussions on the science, engineering, performance and economics of CPV systems” to the Asia Pacific region. The CPV-9 Conference program is not yet available. However, the CPV-8 conference proceedings have been published here on the AIP (American Institute of Physics) website and can be freely downloaded!

I hope CPV-10 will be held in the American southwest.

According to Greentech Media: “Bringing together leading solar companies, influential regulators and policymakers, forward-thinking utilities and bullish investors, the sixth annual Solar Summit is an event where the industry comes to do business and gain access to the freshest, most innovative research on the maturing PV market.”

The 2013 Solar Summit begins on April 23 since there is a Pre-Conference Workshop: “Doing Business in Southwest Solar Markets” on Monday at additional cost. There’s bound to be some explaining to do about recent developments in the Arizona solar market.

PVSC 39, the premier US photovoltaic technical conference, moves to the gamma city of Tampa, Florida. Basking in the best eastern US PV solar resource, the technical program covers eleven (11) Technical Areas including the PV Velocity Forum plus Exhibits geared towards scientists and engineers. Abstracts are due by February 4, 2013.

Intersolar Europe’s engagement at the New Munich Trade Fair Centre extends to year six. At the crossroads of Europe, Intersolar did contract in 2012. 66000 visitors from 160 countries connected with 1909 exhibitors strewn across fifteen halls or 170000 square meters of exhibition space. Conference Abstracts are due by February 18, 2013.

Will energy storage and the PV and E-Mobility theme bring new visitors and exhibitors? Or will the global solar shakeout and peaking of Germany’s PV market weigh on Intersolar Europe?

Intersolar North America (NA) was resurgent in 2012 via a combination of location and timing even with the PV equipment sector suffering. Intersolar NA was the only major solar tradeshow on the west coast and benefited from proximity to Silicon Valley and even Asia. It’s hard to beat a mini Intersolar Europe in your backyard!

The cancellation of PV America West in 2013 and 2014 will also bolster Intersolar NA’s fortunes.

Overcompensating for Frankfurt, the 28th European Photovoltaic Solar Energy Conference and Exhibition (EU PVSEC) goes haute couture in “The City of Light” as I advised last year. The EU PVSEC Call for Papers closes on March 1, 2013. While the 27th EU PVSEC Conference flourished, the exhibition contracted almost 35% to 656 exhibitors though the Frankfurt location helped attract some 31500 visitors, almost half from Germany. The solar shakeout may further impact the Paris EU PVSEC exhibition.

Keep in mind the venue, Parc des Expositions Paris Nord Villepinte, is about a 25 minute train ride from Gare du Nord station so plan your central Paris accommodations with care.

EU PVSEC has officially adopted the calendar year in the event title though I see both “EU PVSEC 2013” and “28th EU PVSEC 2013” forms being used.

Back to October basics, Solar Power International will transform the “Windy City” into the “Solar City” (not to be confused with SolarCity Corp (NASDAQ:SCTY)) for a few days. While exhibitors at SPI 2012 decreased 25%, SPI is still the premier US solar tradeshow bar none. SPI 2012 Conference session Recordings and presentations are available online for full conference attendees (login required).

Will the Chicago location attract the Midwest solar industry and how will the SPI 2013 Exhibition be leveraged to foster grassroots solar in the wind?
Is it even possible for the SPI 2013 organizers to top President Bill Clinton’s Keynote Address last year?

Covering seven (7) topic Areas, the PVSEC-23 Call for Papers is open and speaking abstract submissions are due by May 31, 2013. Limited details beyond the Taipei International Convention Center (TICC) venue are available. PV Taiwan 2013, held on October 30 – November 1, 2013, is a parallel event to PVSEC-23.

A week before the late US Thanksgiving Day holiday, the 14th Forum Solarpraxis will again “focus on the political environment, market developments, new international markets, financing and quality.” The size of the German PV market may finally decrease in 2013 after years of such predictions. The new, rethought EEG (Renewable Energy Act), called EEG 2.0, will have a profound impact on the PV and the nascent energy storage markets in Germany.