Researching eSolar Sierra SunTower: a History of Concentrating Solar Power Underperformance, I adopted a 360 approach dealing with eSolar, Inc. and their communications firm conduit, Antenna Group. In addition to the Sierra SunTower underperformance history, I worked to get updates from each of the key project partners: Penglai Electric, ACME Group, and GE Energy, a business group of the General Electric Company (NYSE:GE).

Penglai Electric deal goes cold
At the end of March 2013, I asked eSolar:

Is any update available on eSolar’s Chinese partner, Penglai Electric?
Perhaps they should be removed from the partner page?
The website link leads to a non-existent site.

A few days later, I was told:

eSolar is in the process of updating its website at the moment. In regard to the partnership with Penglai Electric, Penglai is currently pursuing project opportunities in China and is in the early stages of project development. Their efforts have been focused on securing the appropriate permits for the initial project in China.

This has been the story since the supposed 2 GW (GigaWatt) deal had been announced as “eSolar Partners With Penglai on Landmark Solar Thermal Agreement For China”. Bill Gross was the founder and chairman of eSolar at the time but is no longer listed among the eSolar Board of Directors in contrast to his LinkedIn profile.

Yesterday, when I looked at the eSolar Partners & Customers webpage, Penglai Electric had been removed! However, the press release on the deal remains.

Will the real Penglai Electric please stand up?

ACME Group
In 2009, “eSolar Signs Exclusive License with ACME to Construct 1 Gigawatt of Solar Power Plants in India” resulted in a $30 million investment by the ACME Group for exclusive rights to develop eSolar projects and technology in India. Per the press release, “Construction will start later this year on the first 100 MW of eSolar power plants”. Instead, ACME developed, built, and commissioned 2.5 MW (MegaWatt) of a planned 10 MW project near Bikaner, Rajasthan, India, as I covered before in eSolar Sierra SunTower offline – Again.

Credible comments here, here, and here reported on the underperformance of the Bikaner eSolar Tower shown in the Google Map. To confirm these reports, I contacted ACME without result but obtained a copy of the “ACME’s CSP Initiatives” presentation from the 2012 CSP Today India Conference. Commissioned in April 2011, the Bikaner eSolar Tower only achieved 1.7 MW peak generation of the 2.5 MW capacity because of the lower than expected Direct Normal Irradiance (DNI) and reduced atmospheric visibility according to the inset ACME “Operating Indian Field Condition” slide. 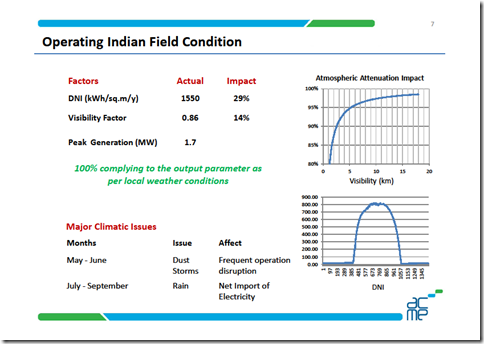 The Bikaner location had an actual DNI of 1550 kWh/m²/y (kiloWatt-hours per square meter per year) or 29% lower annual solar resource than the expected DNI of 2190 kWh/m²/y. Likewise, the visibility factor was 0.86 or 14% lower than the expected 14 kilometer visibility. ACME also claims major climatic issues impacted generation including dust storms causing frequent operation disruption and rain resulting in the net import of electricity!

To my knowledge, the ACME Group has not disclosed the project cost of the Bikaner Solar Thermal Power Plant. I wonder if the Victory Energy dual cavity thermal receiver installed at Bikaner is the same one upgraded at the Sierra SunTower by the external thermal receiver from The Babcock & Wilcox Company (B&W), a wholly owned subsidiary of McDermott International (NYSE:MDR)? 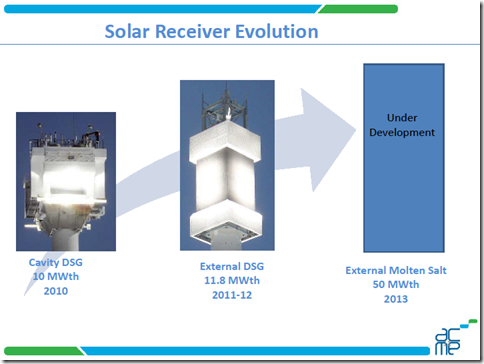 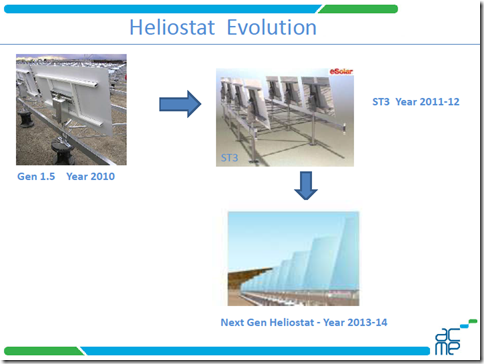 The Next Gen Heliostats appear to almost double in size by 2013-2014 from the ST3 heliostats used at Bikaner, and a conceptual 100 MW sized Power Tower Plant image shows the corners of the heliostat fields cropped into hexagonal shapes reducing the modular field cost and footprint. 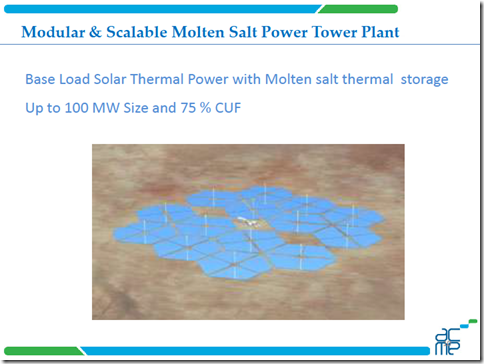 ACME’s Cost Comparison of PV & CSP must require lots of explanation. For example, how does DNI impact the Capital Cost in $/W (dollars per Watt)? 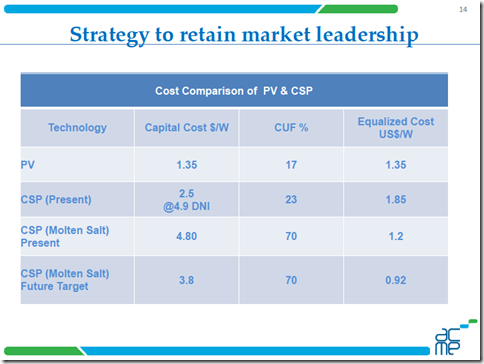 Is it possible to get an update on the GE partnership with eSolar?
Has GE made any additional investments in eSolar?
Has the hybrid project with eSolar CSP technology been started yet?

GE Energy acknowledged my questions and seemed to be working on a response albeit at a slothful pace. After almost three weeks, I called GE Energy for slow playing the effort and haven’t heard from them since.

I’ve had good luck with GE Energy in the past and thought their treatment of this blogger was always fair and respectful.

I’m not sure how to interpret GE Energy’s lack of action on at least two simple questions out of three. Has GE Energy already decided to reinvest in eSolar or is the company still pondering the decision?

“Waiting to be unleashed” by Upendra Singh for EnergyNext is worth a read and confirms the 2.5 MW Bikaner eSolar Tower is the only completed concentrating solar power (CSP) plant in India.