Update: Just this morning, Nanosolar GmbH today announced a “Swiss Investor is acquiring Nanosolar GmbH“. The unnamed Swiss investor signed an agreement to acquire the Nanosolar module factory in Luckenwalde, Germany, to focus on the production of c-Si (crystalline silicon) modules for the investor’s projects “and innovative niche products for residential BIPV.”  A link to the press release is to yet available and the Nanosolar GmbH website is Under Construction at the moment.

Since “The Clock Is Ticking at CIGS Solar Firm Nanosolar” by Eric Wesoff at Greentech Media, the final countdown has begun until the global online auction of Nanosolar’s production and manufacturing equipment and related capital assets at the San Jose, California factory on August 13, 2013, and August 14, 2013.

We are extremely pleased to be represented by Heritage and Maynards, who we’ve selected for their extensive market knowledge and collective expertise across a wide variety of industries. 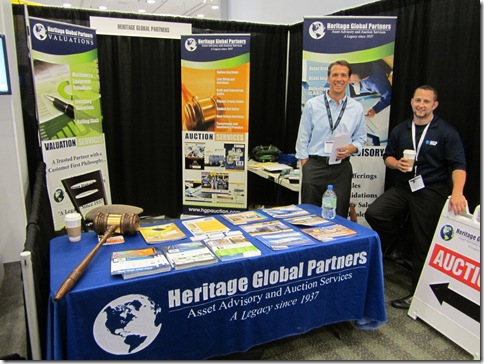 Upon seeing the news, I visited the Heritage Global Partners Moscone West booth #8636 at Intersolar North America and learned prospective bidders can visit the Nanosolar factory at 5521 Hellyer Avenue, San Jose, CA 95138 in advance of the planned inspection days on August 12, 2013, and August 13, 2013.

I understand Nanosolar is still shopping the sale of the company, but the bulk or piecemeal auction of the equipment and capital assets now has an end date.

I’ve been covering Nanosolar since 2006 and earlier this year I predicted:

OK, I’ll jump out on a limb and predict Nanosolar will line up further investment or be acquired and survive 2013.

Last year per CIGS PV Poll Results and Analysis, Blog readers voted Nanosolar the CIS/CIGS start-up company most likely to fail next. A few weekends ago, I did not see a single car in the Nanosolar parking lot on a Saturday afternoon.

Nanosolar panels were supposed to have been sold on eBay and craigslist recently straight from the factory.