The 28th EU PVSEC has released the top line key facts and figures from the event. 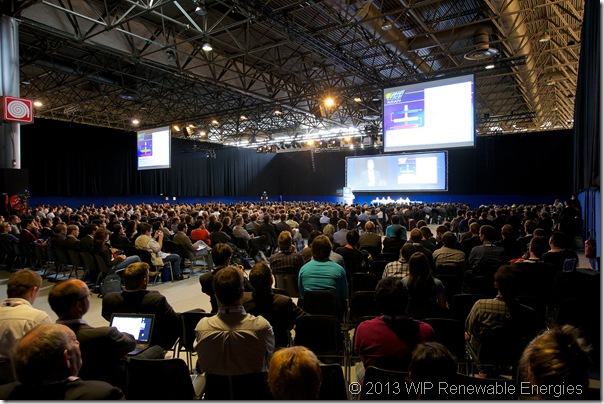 Meanwhile, 12000 trade and business professionals from 92 countries visited the Paris photovoltaic (PV) Industry exhibition, down a whopping 61.9% from the 31500 Visitors from 102 countries at the 27th EU PVSEC.

So what is revealed by the 28th EU PVSEC statistics? With renewed focus, the conference appears to be approaching sustainable levels requisite for a global PV Industry that has grown over ten (10) fold since 2006 when 2649 delegates attended the 21st EU PVSEC in Dresden, Germany. On a subjective basis, I observed fewer Asian delegates although the EU PVSEC has not released conference participant breakdowns by country yet.

For the exhibition, the decline in exhibitors mirrored the decline in visitors on a percentage basis. While the exhibition situation is less clear, the worst declines may be over considering there were 382 exhibitors seven (7) years ago in Dresden. However, the phase of irrational PV tradeshow exuberance is over giving way to industry consolidation, introducing new technologies, and marketing targeted at known partners and customers. As many have observed, only a few module manufactures exhibited at EU PVSEC 2013.

EU PVSEC rightsizing had one distinct benefit. The EU PVSEC 2013 held at Parc des Expositions Paris Nord Villepinte was the most compact conference and exhibition venue since the 21st EU PVSEC. Moving between the conference, exhibition, parallel events, and even the pressroom was a breeze!

I thought more conference delegates attended the final day Closing Session than in prior years pointing to a growing core of dedicated PV research and industry professionals.

Please let me know what you think about the streamlined GUNTHER Portfolio Blog design.