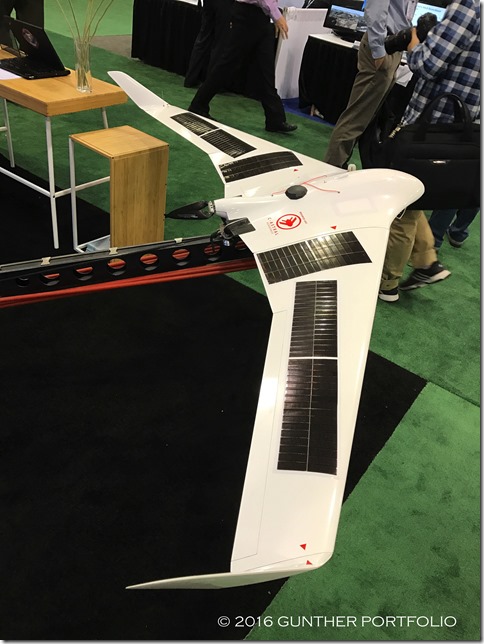 During the third week of November, Alta Devices was making the Silicon Valley event rounds at Drone World Expo and the IDTechEx Show! USA 2016. I spoke with Alta folks staffing the booths at both expos to get the latest on the company.

As I heard earlier this year, Alta Devices prices a one (1) Watt series connection of five (5) thin film, single junction, gallium arsenide (GaAs) solar cells at $100 or $100 per Watt. This may be single unit list pricing or require a 5000 cell minimum order quantity. Per “How Solar Can Keep a Drone Flying All Day” by Katie Fehrenbacher at Fortune this September:

Rich Kapusta is the Alta Devices Chief Marketing Officer and Head of Sales.

While Alta also offers single and half cells, an array can be configured with a matrix series and parallel arrangement of solar cells to meet application requirements for voltage, current, power, and shape. Single cells can be stacked in series with conductive epoxy, and a busbar is added to complete parallel connections.

If you must have one, the Analog Devices, Inc. energy harvester ADP5090-2 Evaluation Board ships with a single 0.22 Watt Alta Devices solar cell for $49.

I was also told Alta Devices is in the process of ramping annual cell production capacity to 3 Mu (million units). In 2016, Alta expects ~100 kW (kiloWatt) of production, followed by about ~500 kW in 2017. Longer term, Alta Devices and parent company, Hanergy Thin Film Power Group Ltd (HKG:0566), are planning the next factory expansion for around 2019, location to be determined. Though China is preferred, a U.S. factory is at least more plausible under a President Trump administration.

At the Drone World Expo, C-Astral Aerospace Ltd. displayed their latest UAV, the Bramor ppX-LRS (long range solar). Looking at the inset photo, I thought this might be a prototype unit. While no connection cables were visible, the solar cells were not attached or laminated flush to the wings.

In response to my questions about the Bramor ppX-LRS unit and the additional flight time with the Alta Devices solar cells, a C-Astral spokesperson said:

So the Bramor ppX-LRS is still in the stage of testing, as we need more sunlight directly to test it properly, we are waiting for the summer season. Due to this we assume it will be available for production in Summer 2017, end of Q2.

About the endurance please read the Press Release Alta Devices did around the Commercial UAV Expo 2016: http://www.altadevices.com/altas-solar-technology-power-c-astrals-next-generation-uavs/. Based on their tests we can achieve the additional endurance for up to 2 hours.

The standard C-Astral Bramor ppX UAV is specified with an endurance of up to 3.5 hours while the Bramor ppX-LRS with Alta Devices solar is supposed to increase flight time up to 5.5 hours.

From my photo analysis of the LRS version unit, I observe fourteen (14) strings with sixteen (16) solar cells each for a total of 224 cells. Since the UAV’s lithium ion polymer (LiPo) battery voltage is not disclosed, there is insufficient information to determine the parallel arrangement of the strings. However, my best guess is the seven (7) strings on each wing are connected in parallel because of the two, two, and three string matrix arrangement, and, if a higher voltage is required, the strings from each wing are then connected in series instead of in parallel.

While the solar cell Watt-peak (Wp) varies in the Alta Devices Technology Performance Brief with the encapsulation material, settling on 0.2 Wp per cell results in 44.8 Wp for both wings of the Bramor ppX-LRS. Further, assuming a strong sunny day without clouds, some 246.4 Watt-hours (Wh) could be generated over 5.5 hours. Converting the above Wh peak energy to milliamp-hours (mAh) using common LiPo battery voltages of 11.1 Volts (V) and 22.2 V, results in about 22000 mAh and 11000 mAh respectively, similar to standard LiPo battery sizes. Therefore, under the best solar insolation conditions, the Alta Devices solar array on the Bramor ppX-LRS could extend battery life by over 50 percent, in effect adding a battery with “less than two ounces of weight” plus the maximum power point tracking (MPPT) and a charge controller.

When I asked about the real world performance of the Bramor ppX-LRS at the Drone World Expo, C-Astral expected average flight times to increase by about 1 hour under nominal solar conditions.

Unlike small UAVs, high altitude long endurance (HALE) UAVs are designed to operate above 50000 feet (~15.2 kilometers) for extended periods of time, and HALE UAVs can expect consistent Air Mass Zero (AM0) solar spectral irradiance on the order of the solar constant. Alta Devices has said they are working with mostly commercial HALE UAV customers and details the challenges of this environment in the white paper, “Selecting Solar for High Altitude Long Endurance Aircraft”. “Top 8 Solar Powered Drone (UAV) Developing Companies” by Dricus at Sinovoltaics Group details solar powered HALE UAV efforts by Airbus, Google, and Facebook among others. 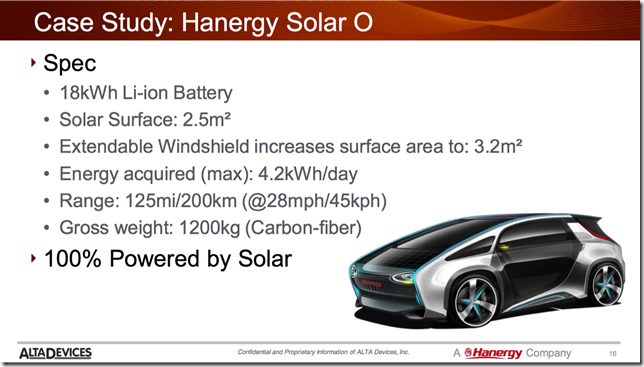 At the IDTechEx Show! USA 2016, Alta Devices also presented a Hanergy concept EV (Electric Vehicle) that might go a week without recharging given an average 30 mile (~48 kilometer) commute per day. Well, it looks as though this vision will have to wait until 2021 or 2022 given the following.

As our price comes down we start to go after more of these markets, and it won’t be long, 5 – 6 years from now, that we’ll be in the single digit dollars per watt price point which makes this very compelling for all those things that we just talked about.

Also, it does not appear this build out, “Hanergy TF building 10MW R&D and pilot line for Alta Devices GaAs solar cells”, ever occurred in China, instead any first phase three (3) MegaWatt (MW) capacity investment was directed to the US factory location in Sunnyvale, California USA.

Alta Devices executive management is flying low under my questions and did not acknowledge or respond to them for this post.