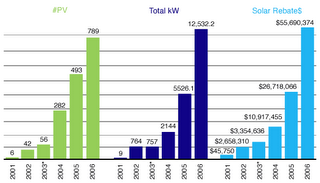 There have been a number of updates on New Jersey’s Clean Energy Program™ (NJCEP, http://www.njcep.com) website over the past month.

A Customer On-site Renewable Energy (CORE) Program Update was released on August 17, 2006. At the August 16, 2006, Board Agenda Meeting, the NJ BPU Board approved the following rebate levels effective September 1, 2006. Private Sector rebates were reduced from 12.6% to 16.7% for systems less than 10kWp to 100kWp respectively. For example, Private Sector Solar PV Application rebates for systems less than 10kWp in size were reduced to $3.80 per Watt from $4.35 per Watt. Public and Non-profit Sector rebates were reduced 14.6% to 20% for systems less than 10kWp to 100kWp respectively. Rebates for systems larger than 100kWp were reduced from 19.6% to 39.7% for Private, Public, and Non-profit sectors. In addition, the previous 100kWp to 700kWp rebate band was split into two bands: 100kWp to 500kWp and 500kWp to 700kWp. The revised CORE Rebate Schedule will be in effect for all complete applications received by the CORE processing staff on or after September 1, 2006.

CORE Queue <=10kw Sept 15, 2006 and CORE Queue > 10kw Sept 15, 2006 updates were released sometime this week. Each queue is being maintained in a cumulative fashion; all applications are included since the queues were first released earlier in 2006. I plan to post a detailed market analysis of both CORE Queues in future posts.

An NJ Solar Transition White Paper, Underwriting Solar Investments In New Jersey: Achieving Scale In An RPS-Dominated Environment, was released with a preface, Roundtable Discussion: New Jersey’s Solar REC Market – Where it’s been, Where it’s going, Why it’s Important, for The 2006 New Jersey Clean Energy Conference and Leadership Awards held on September 18, 2006. The basic gist of this white paper concerns transitioning the NJCEP CORE Program from rebates and grants to a sustainable Solar Renewable Energy Certificate (SREC) market based financing program. I still need to read this white paper, but, if a successful program can be crafted, this could be an alternative to the German Renewable Energy Law (EEG) approach more compatible with American style business and government.

While I appreciate the resource, I wish the NJCEP website supported RSS or offered an email subscription so folks were automatically notified of website updates.