The big news was who was absent.
The Valencia Call for Solar Photovoltaics. 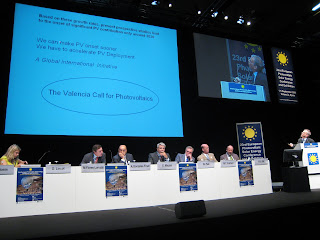 While “Regional Minister of Infrastructure and Transport Mario Flores Lanuza has opened the world´s largest solar energy conference in Valencia” (Español) may have been the headline, the key observation on the Monday morning, September 1, 2008, opening of the 23rd European Photovoltaic Solar Energy Conference and Exhibition (EU PVSEC) was no representative from the Spanish central government chose to attend the “the most important international Event in the field of Photovoltaics”.

Discussions in the opening speeches and press conference centered on the “Spanish question” regarding a draft proposal to reduce Spain’s photovoltaic (PV) Feed-in Tariff (FiT) and cap annual installations at 300 MWp (MegaWatt-peak). With Spain’s existing FiT set to expire on September 28, 2008, Spanish PV installers are scrambling to complete projects before the current law is superseded. More than 1.6 GW (GigaWatts, pronounced JigaWatts by many Europeans like in “Back to the Future”) of photovoltaics are expected to be installed in Spain this year, perhaps even by the end of September. 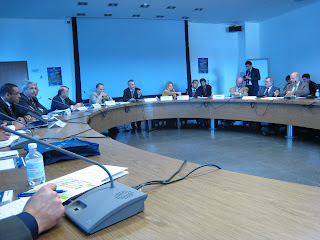 EPIA (European Photovoltaic Industry Association) President and Isofotón Communication and External Affairs General Manager Ernesto Macias was direct in his opening remarks and responding to a statement by ASIF (Spanish Photovoltaic Industry Association) President Javier Anta at the press conference said, “(We had) the wrong tariff and wrong model with too many large plants.” This was the root cause of the Spanish PV market explosion.

Mr. Macias outlined a light gray counterproposal to the Spanish FiT draft revision which would:

These were the key points I noted, and I am waiting for an official copy of the proposal from EPIA. The Spanish question should be decided in a matter a weeks. Outside of the press conference, a number of sources including Photon International Editor-in-chief Michael Schmela have mentioned the possibility of a higher Spanish PV cap in the next FiT revision of 500 to 600 MW.

Although not touted as important metrics, here are a few key stats from the 23rd EU PVSEC: 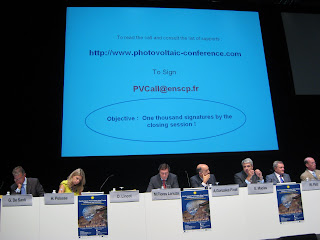 In his Welcome Address, the Conference General Chairman Daniel Lincot, Research Director at CNRS, Institute for Research and Development of Photovoltaic Energy (IRDEP), Paris, France, announced an international call by scientists for the accelerated worldwide deployment of Photovoltaics known as “The Valencia Call for Solar Photovoltaics” echoing the Kyoto Protocol. This declaration is supported by over 200 PV and society personalities and can be found at the Chairman’s Initiative for PV on the EU PVSEC website. You (yes that means YOU!) are invited to join this initiative and sign the Call by sending an email to PVCall@enscp.fr or contact Daniel Lincot at the address shown in the above link along with your comments and proposals.

Buenas noches from Valencia where Iberia Airlines has held my checked bag hostage for over four (4) days now. My brand new camcorder is already out of battery power, and I am dreading the demise of my trusty Canon PowerShot SD800IS battery. Both chargers and my voice recorder are in the missing bag. That’s my excuse for not getting a post out sooner.