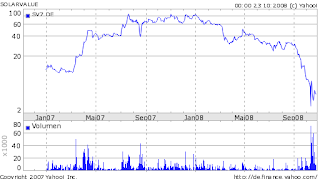 Key points from the production deferment press release include:

The capital increase planned for 2008 could not be performed due to a law suit initiated by one shareholder with one share and the unexpected financial market crisis that significantly lowered the Solarvalue share price.

And there are two new entries by John Mott in NEWS FROM RUSE – THE BLOG (Deutsch). Reading between the lines, it looks like Boron removal may still be a challenge for Solarvalue.

Solarvalue post split shares traded early in the €0.41 to €0.99 range in Frankfurt or visit XETRA:SV7 for the latest quote.