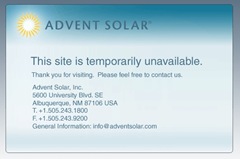 In September of last year, Advent Solar went to the capital markets to raise the funds required to acquire solar cell and module manufacturing equipment.  However, the current credit crisis has made raising the money impossible right now, especially for business plans with capital-intensive strategies. The recognized value of Advent Solar’s technology enables it to pursue alternate market deployment paths.  The company will begin licensing its Ventura technology.

Advent Solar claims to have completed development of its Ventura patented technology announced at the 23rd European Photovoltaic Solar Energy Conference and Exhibition (EU PVSEC) in Valencia, Spain, with “Advent Solar Introduces Ventura™ Technology to Accelerate Scalable Silicon Photovoltaic Solutions”. Per the company, Ventura based products are ready for manufacturing.

The result will be the production of our current generation of solar cells and modules by other manufacturers.

If the other manufacturers will be licensees, does that mean Advent Solar will be forced to terminate its supply deals, “Advent Solar Reaches Agreements to Ship 250MW of Ventura™ Solar Modules with European Partners”, with Enerpoint, MHH Solartechnik, and SunConnex? And what of the $350 million silicon wafer sourcing deal with Deutsche Solar announced in “Advent Solar Signs Polysilicon Wafer Agreement with Deutsche Solar AG”?

Surveying the solar and green technology layoffs, “Cleantech’s Solar Conundrum” posted by Neal Dikeman at the Cleantech Blog dares to suggest that solar companies may not be getting funded for reasons other than the financial crisis. I observe traditional silicon solar cell start-ups may face an even higher funding hurdle than thin film technologies. It’s all about scale.

Our health care is too costly; our schools fail too many; and each day brings further evidence that the ways we use energy strengthen our adversaries and threaten our planet.

We will harness the sun and the winds and the soil to fuel our cars and run our factories.

Now, if only President Obama would begin advocating Feed-in Tariffs!