When I first saw “SolFocus Receives Award from National Renewable Energy Laboratory”, I missed the subheading, “City of Mesa, Arizona to Serve as First Showcase of Technology Developed in the DOE/NREL PV Incubator Program”.

Only later in Google Alerts did I notice “Solar Panels to Produce Power, Boost Local Economy” which states:

The City of Mesa announced an agreement with SolFocus, Inc. to build 11 concentrating photovoltaic solar arrays, which will help the City meet its energy needs, foster the development of solar technologies and invest in Mesa’s economy.

The next generation Concentrating Photovoltaic arrays will be built alongside four existing demonstration arrays at the City’s Central Arizona Project Water Treatment Plant across the street from Red Mountain Park. These arrays will interconnect with the Salt River Project’s electric distribution system meter that serves the park, providing 92 kilowatts of electricity.

The City of Mesa has projected the CPV project will cost $558,180 and save between $16,000 and $20,000 per year based on energy production and rates for avoided SRP (Salt River Project) electricity. The project is contingent upon receiving an Energy Efficiency and Conservation Block Grant (EECBG) under the American Recovery and Reinvestment Act of 2009.

Located at the City of Mesa’s Water Treatment Plant, land acquisition and special ground preparations do not seem to be required.

City of Mesa Energy Resources Department Director Mr. Frank McRae agreed to answer a few of my questions regarding the CPV project.

Q & A with Frank McRae, Mesa Energy Resources Department Director
Q: When would you expect to hear back on the grant?
A: We recently received “conditional” approval of the project as a part of the EECBG stimulus program from US DOE.  There a few NEPA compliance items for final approval which we expect very shortly.

The public review process for the purchase of the arrays and their installation was in accordance with all state and city procurement requirements which included a formal Request for Proposals (RFP), advertisement of the RFP in local papers, sealed bids, a thorough analysis of the proposals including follow up questions/answers, and Council approval of the selected proposal with the City Manager authorized or his designee to execute a contract.

Q: Contingent on the grant, when do you expect construction might start and finish if things move forward?
A: SolFocus has indicated that installation can begin immediately after the initial payment is made which will be immediately after our receipt of final approval.  The latest we would expect is October 2009 and we expect all equipment to be tested and accepted no later than May 31, 2010. 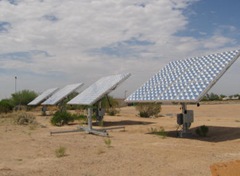 Q: Is it possible for you to describe how the expected $558,180 installation cost was negotiated?
A: An RFP was issued requesting fixed bids in compliance with the indicated terms and conditions.

Q: Where exactly are the four existing demonstration arrays located?
A: The four existing arrays are located at the City of Mesa’s Water Treatment Plant in east Mesa near the intersections of Brown and Power Roads.

Request for Proposals (RFP)
“City of Mesa Partners with SolFocus to go Green!” in the Economic Reporter Volume 2 Issue 3 2009 said:

The Economic Development Office was involved in the development of the RFP, and the review of the responses. In addition to the technical requirements, the RFP required respondents to outline the economic benefits to the City of Mesa including jobs (and associated wages) of jobs retained or created that could be directly attributable to Mesa’s purchase of the equipment.

The SolFocus Glassworks located at 3130 N. Oakland, Mesa, AZ, was a factor favoring SolFocus in the RFP review. The SolFocus Mesa facility produces the mirrors (solar glass reflectors) used in their SF-1100P modules.

It depends on the system, but in the case of SolFocus (Fig. 1), its systems are over 97% recyclable.

SolFocus did not respond to my question asking if the Gallium Arsenide (GaAs) Multijunction (MJ) III-V Solar Cells are the portion that cannot be recycled.

If you decide to attend the Valencia conference in 2010, carry on your bags and avoid Iberia Airlines. Trust me.