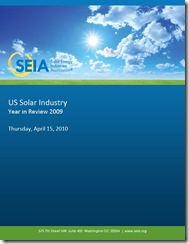 On April 15, 2010, Tax Day, the SEIA (Solar Energy Industries Association) released the “US Solar Industry Year in Review 2009” report and slide presentation with the press statement:

Unlike the Reuters piece “US solar capacity surges in ’09 on incentives-SEIA” by Dana Ford, the New York Times Green Inc. Blog “Solar Growth Slows, With Homes a Glaring Exception” by Kate Galbraith read the report and observed the PV growth rate had slowed since 2008. On page 6 of the report under the Photovoltaics heading, the SEIA said:

However, year-over-year growth in annual grid-tied capacity additions of 38 percent fell short of the 84 percent growth in 2008.

Of course, 2009 was a tough year for almost all industries, and US PV installations still grew at high double digit growth rates during the Great Recession. However, the result must be balanced with the amount of stimulus funds directed towards Renewable Energy Grants in lieu of the ITC (Investment Tax Credit) and block grants to state and local governments. By contrast, German PV installs more than doubled (~153%) from about 1.5 GW in 2008 to 3.8 GW in 2009 driven by the Feed-in Tariff (FiT) performance based incentive model and streamlined paperwork for rooftop installations and interconnection. 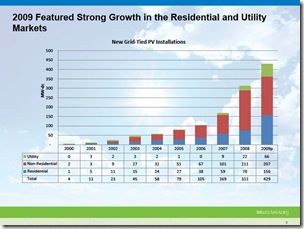 2009 US Grid-Tied PV installations
A total of 429 MW (MegaWatt) of US grid-tied PV was installed in 2009 versus 311 MW in 2008. Residential PV installs doubled to 156 MW lifted by dropping PV module prices and the elimination of the $2000 ITC cap for residential solar electric installations, the best provision of the Bailout Bill (Emergency Economic Stabilization Act, EESA 2008) in my mind. Utility PV installs tripled to 66 MW in part because utilities could leverage the ITC as the prior prohibition was also eliminated in EESA 2008. Non-Residential PV installs, which I assume means commercial and government, contracted to 207 MW. Commercial PV installations bore the full weight of the credit crunch while federal, state, and local governments executed solar plans budgeted in 2008 or backed by fresh stimulus funds.

The SEIA also estimates 40 MW of off-grid PV capacity was added in 2009.

So what do we expect for 2010? We expect a breakout year.
As we look to the future, we are now talking about the solar industry growing by GigaWatts instead of MegaWatts.

With 6.5 GigaWatts of Utility Scale PV projects under development or being constructed over next few years, Mr. Resch said:

As the commercial market comes back which of course is the largest portion of the PV market, we fully anticipate overall to have a full doubling of the solar industry and possibly reaching a GigaWatt this year.

The SEIA expects Utility PV installs to triple again in 2010 to about 200 MW. Commercial PV installations were weak in 2009 as the Renewable Energy Grant or Treasury Grant program was not implemented and running until September. Residential PV installations are expected to remain strong, and California had a record 12.4 MW of residential CSI applications in March 2010.

The Recovery Act Treasury Grant program allowing for a cash grant in lieu of the 30% ITC was instrumental in spurring the industry’s growth in 2009 and so far in 2010 despite being delayed last summer.

SEIA is now advocating for an extension of this program through 2012 to ensure that we continue to grow the US Solar Industry in coming years.

The SEIA is also looking to extend and expand the Manufacturing Investment Tax Credit, so called Section 48c credits, to encourage domestic PV manufacturing and has partnered with the chemical industry in the effort per “Tax Cuts, Renewable Energy Grants Attract Unlikely Allies” by Joel Kirkland for the New York Times. US Solar related industries including chemicals and polysilicon manufacturers garnered some $1 Billion of the $2.3 Billion Manufacturing Investment Tax Credits awarded under the program in January 2010. 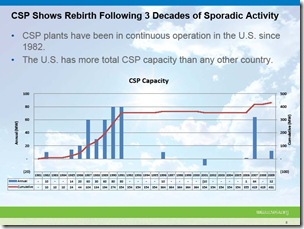 CSP
Concentrating Solar Power seems to dominate every SEIA discussion along with utility scale PV. After 64 MW in 2007 and none in 2008, the SEIA trumpeted three (3) small scale pilot CSP installations in 2009 totaling 12 MWac (MegaWatt alternating current) as a rebirth including “the 5-MWac Sierra SunTower from eSolar, the 2-MWac Holaniku trough from Sopogy, and the 5-MWac Kimberlina linear Fresnel system from AREVA Solar (formerly Ausra).”

About 81 MW of CSP projects are under construction in 2010, and almost 10.6 GW representing “dozens of CSP projects” in the US pipeline are under development and fourteen (14) fast track projects totalling 6 GW plan (hope) to begin construction if permitted before December 31, 2010, when the Treasury Grant program is scheduled to lapse unless extended.

The BrightSource Energy, Inc. Ivanpah project has been identified for fast track permitting by the US Department of the Interior Bureau of Land Management as the proposed site is on federal lands just outside the Mojave National Preserve. Thus far, the state and federal permitting process has dragged on for two and a half years.

The long lead time for building big power plants makes it harder to tell whether BrightSource and its competitors will be long-term survivors, well after the solar shakeout is over.

“The permitting has been a nightmare,” said Mehdi Hosseini, an analyst who covers solar companies for FBR Capital Markets. “And the plants have to have access to water. So those two factors have dramatically slowed down the growth of solar thermal.”

Climate change is forecast to have a devastating impact on fresh water supplies in California and the Western United States per “Drying of the West” by Robert Kunzig for National Geographic, a long, sobering read on the topic.

Mocking my water concerns, the Primm Valley Golf Club is a legacy water user of as many as 1 million gallons (3.79 million liters) per day located just a few miles from the proposed BrightSource Ivanpah project. BrightSource claims Ivanpah will use 100 acre feet of water per year (32.6 million gallons or 123 million liters) or less than one tenth of Primm Valley Golf Club’s annual water consumption.

Granted, most energy generation technologies consume water. According to “How Much Water Does It Take to Make Electricity?” by Willie D. Jones for IEEE Spectrum, natural gas consumes the least water per kiloWatt-hour of electricity generated. Besides PV, of course, which consumes no water when generating electricity and may not even require module washing according to SunPower.

The bottom line is some locations may be unsuitable for siting power plants regardless of the generating technology because of insufficient water resources now or in the climate change future. I wonder if future water thirsty power generating plants will need to be sited on the ocean coasts right next to desalination plants?

I don’t understand why CPV (Concentrator PhotoVoltaics) was lumped with CSP in the SEIA report and ignored in the call. I think it was both an error and an oversight! But why does the SEIA cling to flawed PV Backcasts from Navigant Consulting proven wrong by actual 2009 PV Industry results?